We use them every day. They offer safety, privacy, and even aesthetic value. But, we rarely think about who invented the door. Doors, like everything else, have a history but not much is known about the original inventor of this essential feature of modern-day architecture. Below, we provide a simplified version of the history of doors. 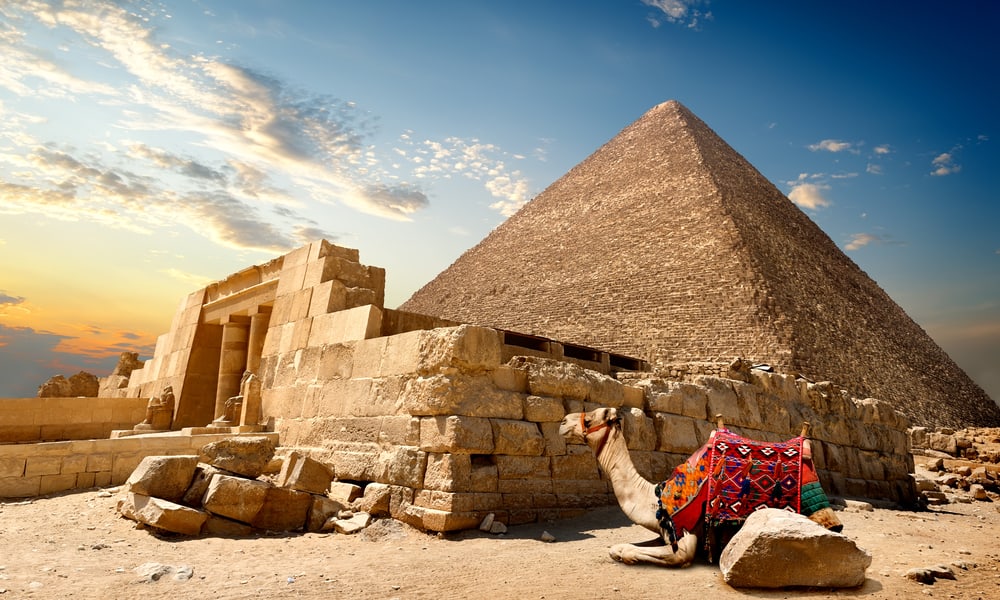 Modern architecture and design trace their roots back to Egypt. No one can deny the architectural genius behind the construction of the ancient pyramids that acted as the final resting place for pharaohs. It is on these tombs that the earliest known doors were installed as far back as 2000 B.C. These ancient tomb doors were made of a single, unframed door slab and engraved with images of what the society then imagined the afterlife to look like.

In the capital Cairo, doors were an important feature of the revered mosques. A lot of thought, time, and resources were put into designing these doors. Some were covered with iron or bronze and were decorated in intricate inlaid patterns. Others were made of wood and spruced up with Coptic style patterns. 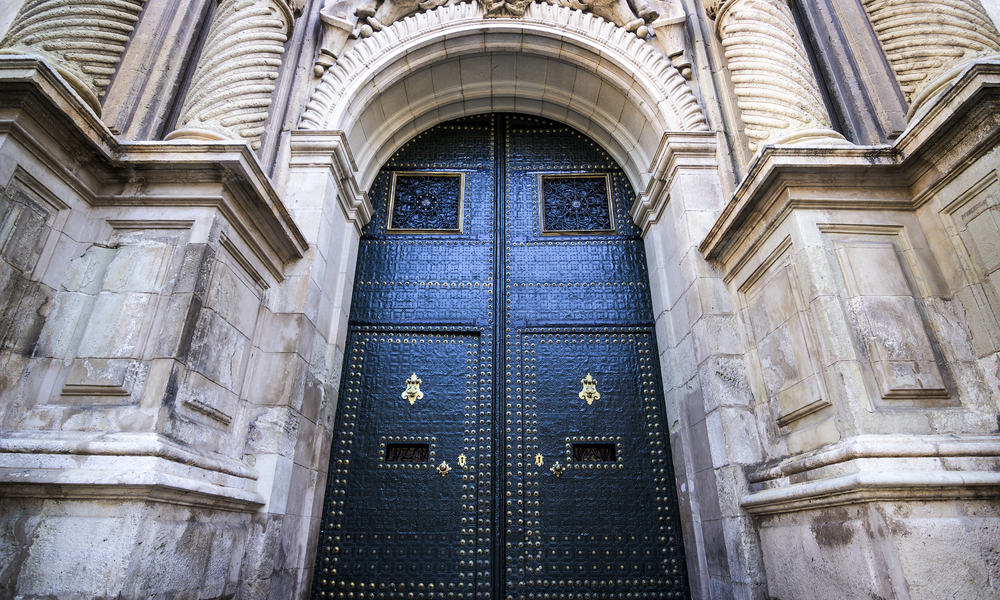 Most of today’s doors are made of timber, a trait we seem to have borrowed from ancient door makers. The most common types of wood used to construct those early doors include olive wood, oak, cypress, cedar, and elm. A common practice was to overlay wooden doors with silver, brass, and gold both for longevity and aesthetic appeal.

Other than the Egyptians, ancient Roman and Greek communities were also instrumental in building the earliest doors. As far back as 79 A.D., ruins from Herculaneum and Pompeii in ancient Rome show that sliding doors and double doors were a dominant feature in temples.

Meanwhile, the first automatic door is said to have originated from Alexandria, Greece, and was invented by Heron, a mathematician born approximately 10 A.D. Speaking of automated doors, the Chinese are credited with inventing the earliest foot-activated door during the era of Emperor Yang of Sui. Later, in 1206, Arab innovator Al-Jazari invented the first automated gate.

Italy also has a special place in the history of the invention of doors. As in the Middle East and Asia, religion and culture had a significant influence on the style and materials used to construct doors in Rome, Italy. In particular, the Basilica di Santa Sabina all’ Aventino epitomized the importance of doors as more than just entrances. Constructed in the period between 422 and 432 A.D., the church featured large doors made from cypress and decorated with carved panels. The Basilica doors are the earliest known carved doors. Engraved on them were the first public images depicting the crucifixion of Christ. 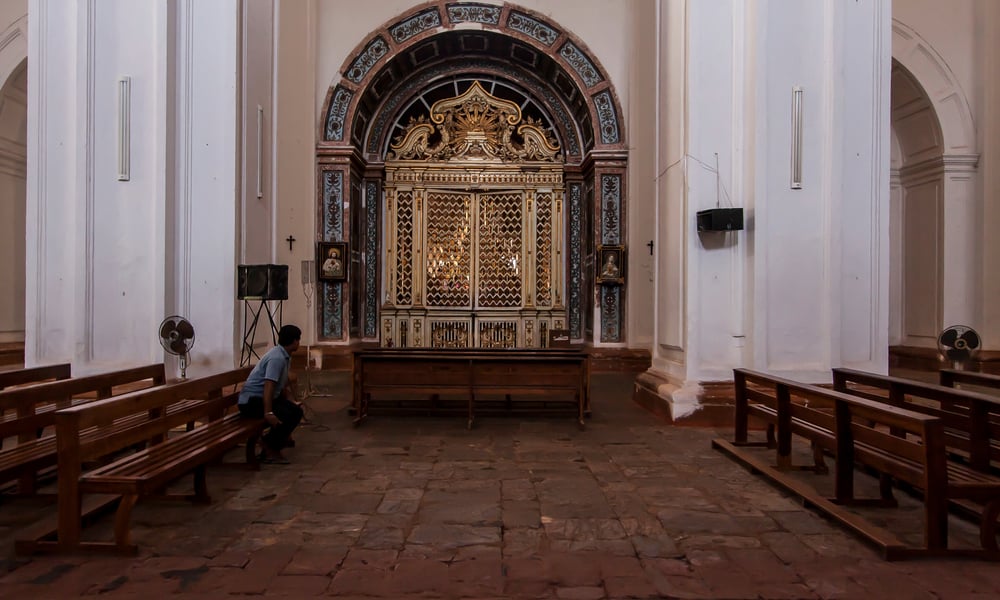 Wood, and in particular, oak, was the most common material for door construction in the medieval times. Nonetheless, each region used whatever material was available, with bronze, copper, and brass being readily accessible in most parts of the Middle East, Asia, and Europe. However, stone doors were common, mostly in parts of the Middle East such as Syria and Iraq where timber is not found in plentiful. Some of the earliest stone doors in these regions measured 9 to 10 ft. high.

Toward the end of the first millennium A.D., doors with a wooden core became less and less popular while copper and its alloys became the preferred material. In particular, bronze was used as the main material for door trims while uncontaminated copper was reserved for the frame and hardware. Copper and bronze continued to be the material of choice well into the Renaissance period.

Wooden doors seem to have made a comeback in the second millennium. The Westminster Abbey door is among the oldest carved doors in Great Britain. This door led to the Chapter House that temporarily housed the Parliament in the thirteenth century and acted as a meeting place for monks.

At the start of the 16-17th century, doors took on a particularly artistic flair. Classic Greek and Spanish designs dominated this period. The doors on cathedrals, entrances to town squares, palaces, and other public buildings were decorated with realistic imagery of birds, plants, and hills. Intricate carvings, sculptures, and Biblical scriptures engraved on the doors were also popular. Many, including the French and Spanish, also utilized Gothic design elements to decorate their doors. 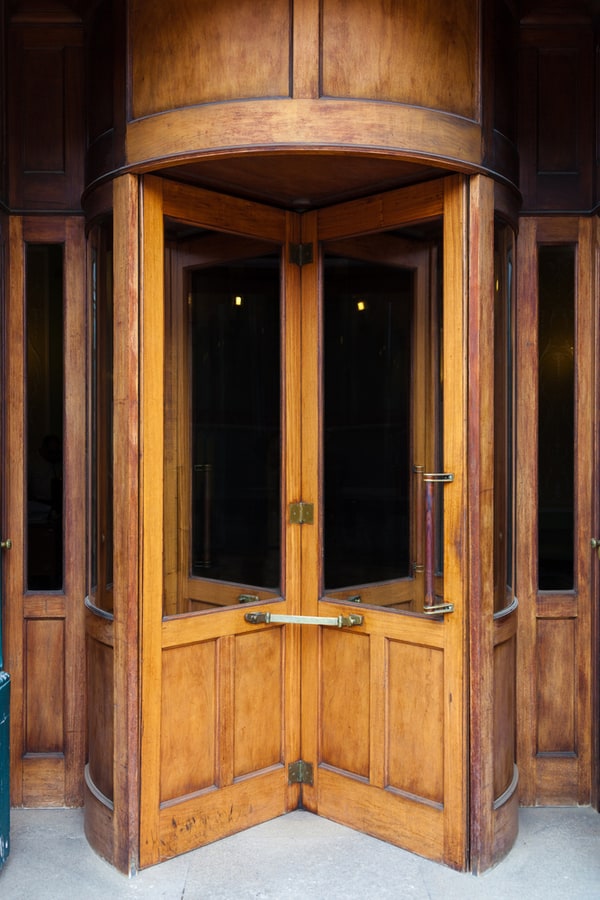 By the late 19th century, door designs had evolved from the single or double leaf and folding types to more advanced innovations. The revolving door in particular epitomizes the spirit of innovation and craftsmanship during this period. Theophilus Van Kannel, an American inventor, is credited with creating the world’s first wooden revolving door, which was installed at the Rector restaurant in Manhattan in 1899.

The invention of the revolving door inspired other advances in the door industry. At the start of the 20th century, several innovators emerged to construct the first hollow-core steel doors, which were popularized as having greater fire-resistance than wooden doors. In the years that followed, aluminum and fiberglass became a popular material of choice for the construction of commercial and residential doors. These two latter materials are lighter and easier to use than steel and offer unmatched durability compared to a mainstay material such as wood.

Trivial as they may seem, doors do have a long and rich history. In ancient societies, doors were more than just entrances—they held meaningful cultural symbolism. In Egypt, doors installed on tombs were a crossing between now and the afterlife. In most of Europe, religion significantly influenced the meaning and design of doors. Meanwhile, trust the innovation-oriented Chinese to develop a foot-sensor automated door. While there is no clear record of who invented the door, the earliest doors can be traced back to Egypt. Still, it is safe to say that modern doors are a culmination of the innovations, craftsmanship, and reiterations of inventors from all over the world.

Do you have any questions, comments, or insights about the history of the door? Let us know below!