Of all the things to happen to one’s home, your door suddenly swelling to the point of rubbing on the door jamb or no longer fitting in the door frame is among the most surprising and annoying. Fortunately, it’s not the most hazardous issue as a swollen door is rarely more than a minor annoyance – just another thing to deal with.

So, what can you do if there are some swollen areas on your door or if the whole thing has suddenly doubled in size? Can a severely swollen door even be fixed? Let’s go over how to fix a swollen door with the following 7 easy steps and tricks.

What causes doors to swell and can they go back to normal?

Most of the time, a swollen door can be fixed, especially if you catch and address the problem early on. If you’ve ignored it for too long, to the point of the door cracking and rotting, you likely will have to look for a replacement. Even if it hasn’t gotten that bad yet but the door is old and flimsy anyway, getting a new one may be the better solution.

If you do want to fix and keep your door, however, you’ll usually be able to. Before we go to the practical fixes, let’s first explain why the problem happened in the first place.

The single word to explain everything would be water. Or, more accurately, high moisture and humidity levels. In the case of an interior door – especially a bathroom door – this is easy to explain. All the excess moisture inside the bathroom, coupled with poor ventilation, is often more than enough to cause swelling and warping in wooden doors which is why bathroom doors nowadays are seldom made of wood. 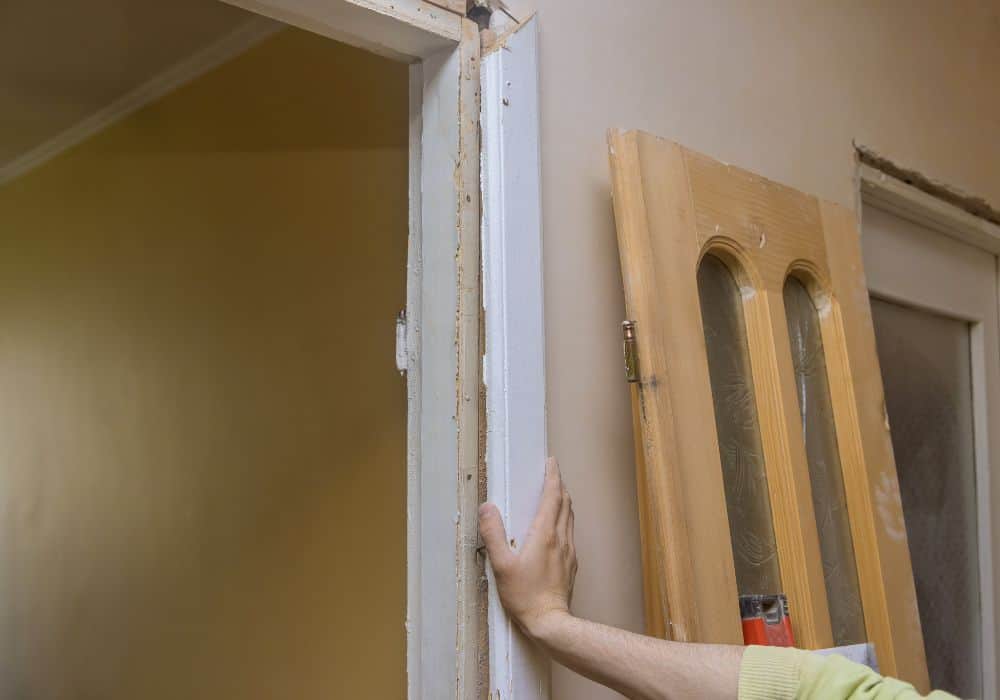 A swollen exterior door can be more puzzling, especially for new homeowners, but it’s not all that uncommon either. Especially if you live in an area with higher average humidity levels. That, together with the occasional period of heavy rainfall,  is a very common culprit for door swelling.

So, what can you do in such situations to avoid having to buy and install a whole new door?

How to fix a swollen door?

There really are quite a lot of things to try in such situations. Depending on the severity of your case, you may not even need to do everything on the list above – even just the first one or two steps can be enough for a lot of people.

Even if you feel like the first step or two would be enough, we’d invite you to consider doing a couple more steps too – both to be safe and for preventing future issues. With exterior doors, in particular, proper insulation and waterproofing are always crucial whereas interior doors can greatly benefit from dialing the indoor humidity levels a bit with an AC unit or a dehumidifier.

But, let’s start at the beginning: 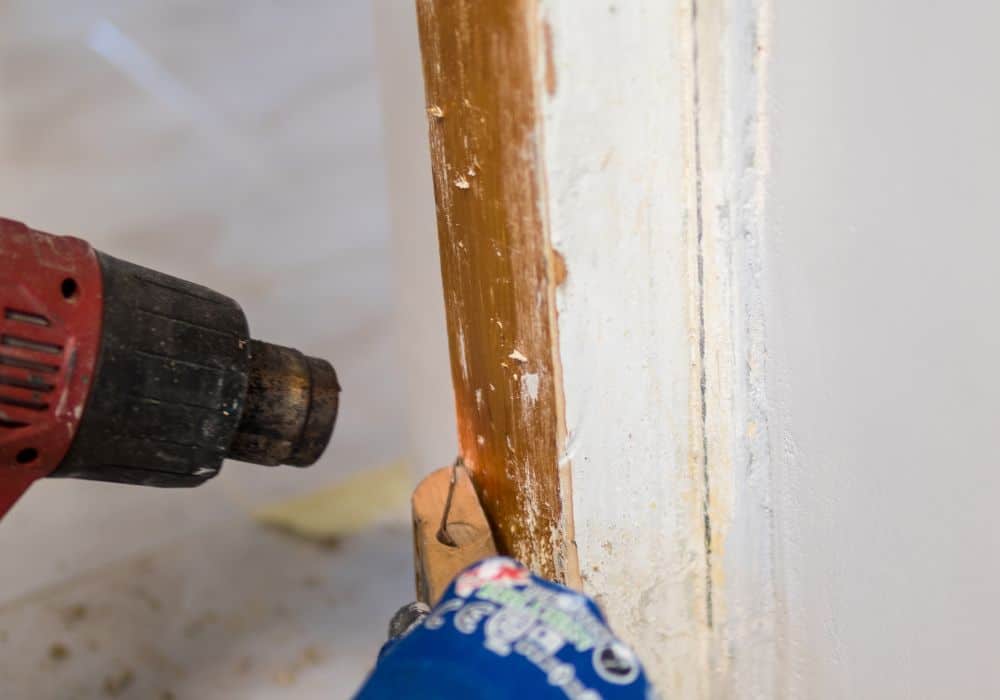 The first thing to try would be a heat gun, or if you don’t have one – a good hairdryer. The idea here is likely obvious – your door is swollen due to a huge amount of moisture build-up inside, so a heat gun or a powerful hairdryer can help alleviate this by drying the door from the outside.

If you are going to use a heat gun, remember to hold it about a foot or ~30 cm away from the wood as you don’t want to accidentally burn it. Most hairdryers can be held closer but be careful with them too as some can be surprisingly powerful.

If you have a rotating fan you can also use that but it won’t be as effective as the other two tools. If you have a few such devices, it’s usually best to give one to different members of the family and use them in conjunction – the more hot air you can circulate around your door, the faster it will dry.

If the door is painted, using just a rotating fan is likely a must as both the hairdryer and the heat gun can ruin the paint. That being said, if you’re going to have to repaint the door anyway, that hardly matters.

Step 2. Fasten the nuts and screws 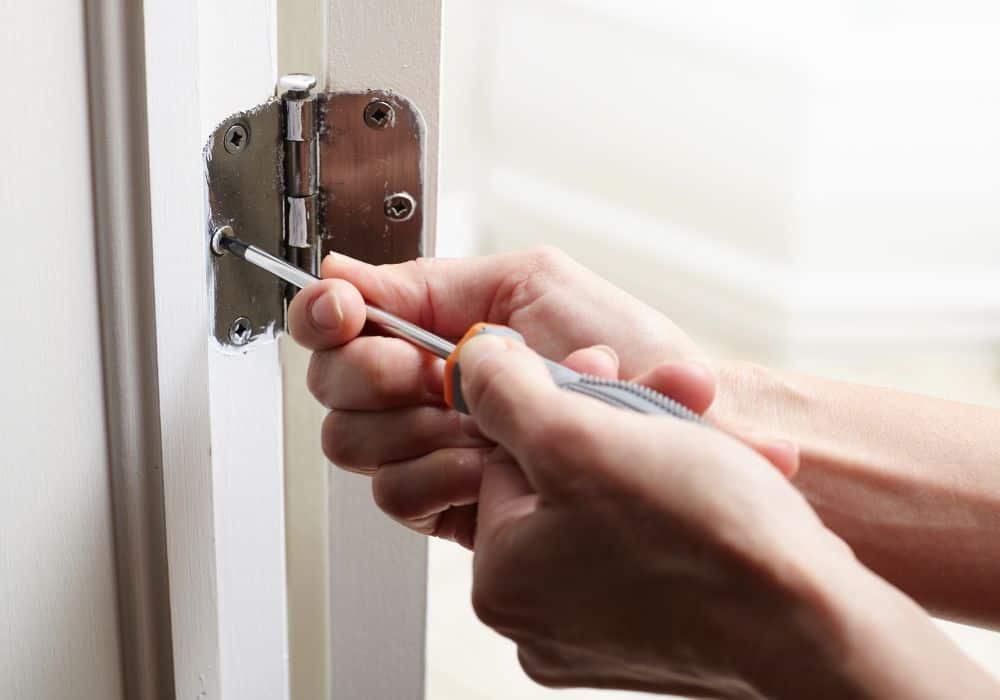 The next step to try after – or instead of – the air drying, is to fasten the screws, hinges, strike plates, and other iron wares on the door. This can often start coming loose in old wooden doors, especially once they’ve started to swell.

Fastening the metalworks will prevent the door from slacking off its place and toward the frame which is what makes it harder to close once it swells. Such fastening can also help with the air-drying step above which is why the two can be done in conjunction.

Step 3. Sand the sides of the door

Using coarse sandpaper on the most swollen parts of a door can sometimes be necessary too. That’s because, if the door is too wrapped, just drying it won’t reduce the swelling and the wrapped places will stay as they are.

This can be a time-consuming process if the swelling was excessive but if we’re just talking about a few localized areas that are preventing the door from closing, it shouldn’t take too long. A sanded door obviously doesn’t look great either so you’ll probably want to paint it but that’s a later step we’ll also talk about below.

Another thing to do with especially nasty cases is sunlight exposure. This can be tricky if you don’t have a yard or a lawn but a large enough balcony can work too if it receives enough sunlight during the day.

Another necessary factor here would be that the weather is indeed sunny and the relative humidity isn’t too high as you don’t want the whole process to end up being counterproductive. 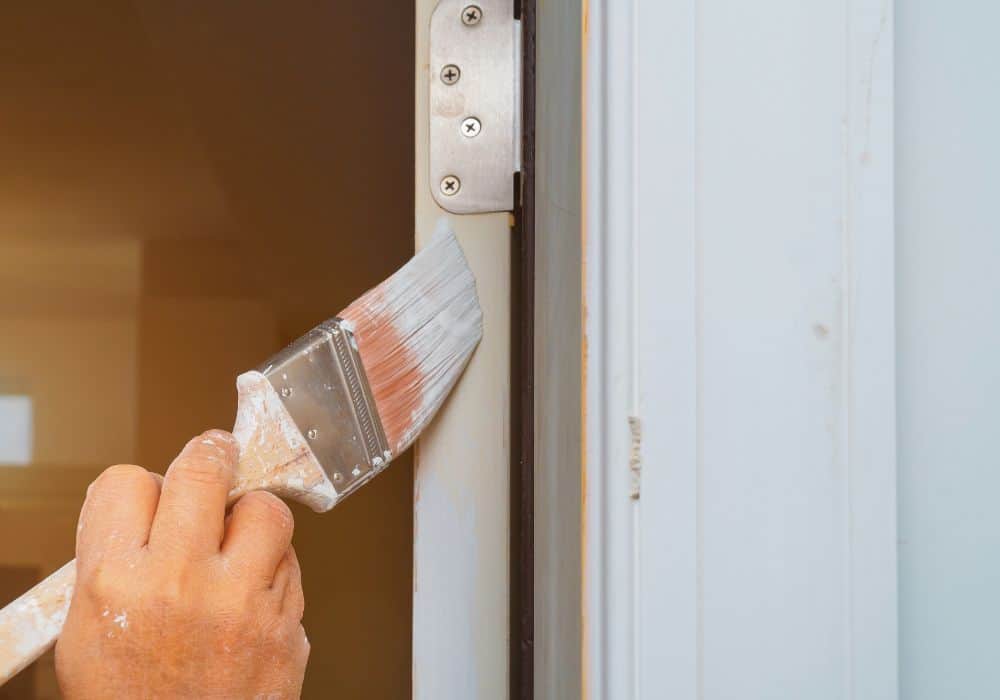 Once the four steps above have paid off and the door is fully dry, fastened, and sanded into shape, the next step is to paint it. This is done not just for cosmetic reasons to hide the marks from swelling and sanding, but also to keep the door dry in the future and extend its life for years or decades.

The first part of this step would be to apply an exterior primer before the paint – on the back, front, and edges of the door. Then, after the primer dries, get top-quality exterior paint and paint two layers over the door, allowing for the first to dry completely before applying the second, of course. Lastly, consider stripping to protect the door from extreme temperatures and weather conditions. 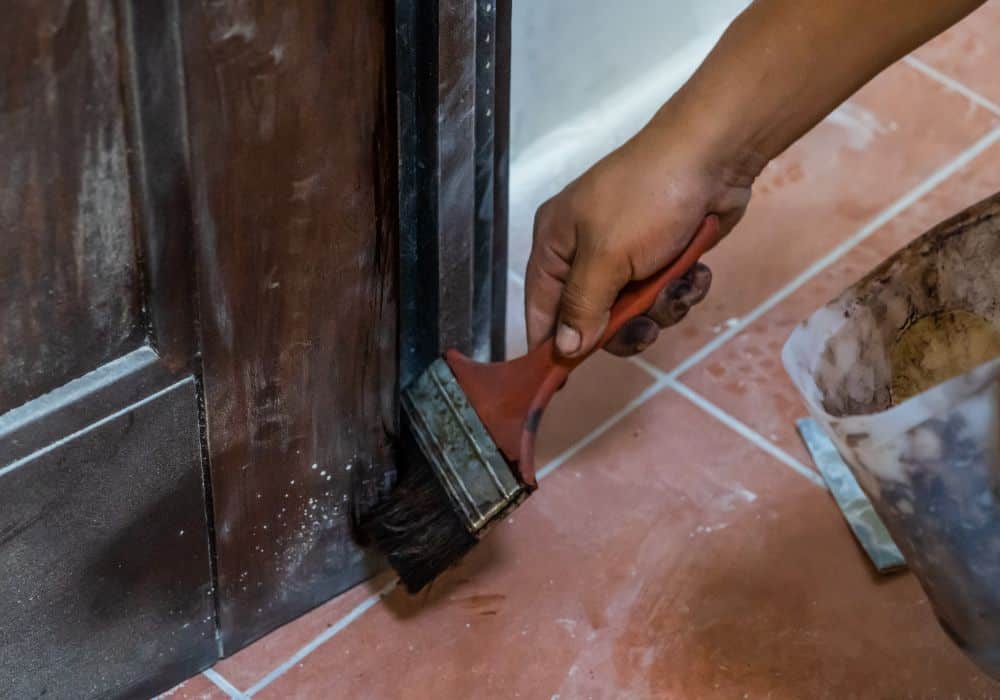 Not a treatment method in and of itself but an excellent prevention for future issues is to apply an exterior sealer as well. One or two coats of sealer are great for insulating from moisture and other problems. Make sure to put a protective coat of sealer on the edges of the door at the very least, as well as all the vertices and the underside of the door.

Also, note that every sealer is different, so you should always read the manufacturer’s instructions to the letter before applying.

Step 7. Consider getting a dehumidifier for your home

The next prevention step for internal doors is to consider getting a dehumidifier if the air conditioner isn’t enough to keep internal moisture in check.

Dehumidifiers can often be seen as unnecessary appliances but if your indoor humidity levels have gotten so bad that your doors are swelling and warping, you probably need one. After all, with air humidity levels that high, your home is at risk of not just door swelling but mold, respiratory problems, pest infestations, and more.

Door swelling is as annoying as it is common – a lot. Fortunately, it’s also treatable when caught early and will often just take you an afternoon or a weekend at most. Going through the whole process carefully and adequately is important, however, especially if you want to avoid problems of this kind in the future.

It’s also worth noting that, should something like this happen to one door in your home, it’s likely that it will happen to another. If it happened to an exterior door, we’d recommend checking your other exterior doors and window frames too. Same with interior doors – the bathroom door isn’t the only one at risk and other nearby interiors, kitchen, or basement doors are also often victims of moisture.

our front solid wooden door is dragging 0n the bottom, against the threshhold plate. my husband wants to cut an 1/8 inch off the bottom of the door. i am afraid it will the start sticking at the top or we will get daylight thru the sides and bottom of door. he says cutting the bootom wont affect the top but looks to me like if would drop the top down. should we wait till cooler weather.this problem started since we have had such hot weather here in texas. Suggestions please

I have an oak cupboard which has a sliding door covering two sliding cutlery drawers. I have tried candle wax without success•. Does anybody have a solution to this problem? I don.t want to buy new cutlery?

We have a houseboat that has hardwood floors including hardwood doors on the floor. How do we keep them from swelling shut?