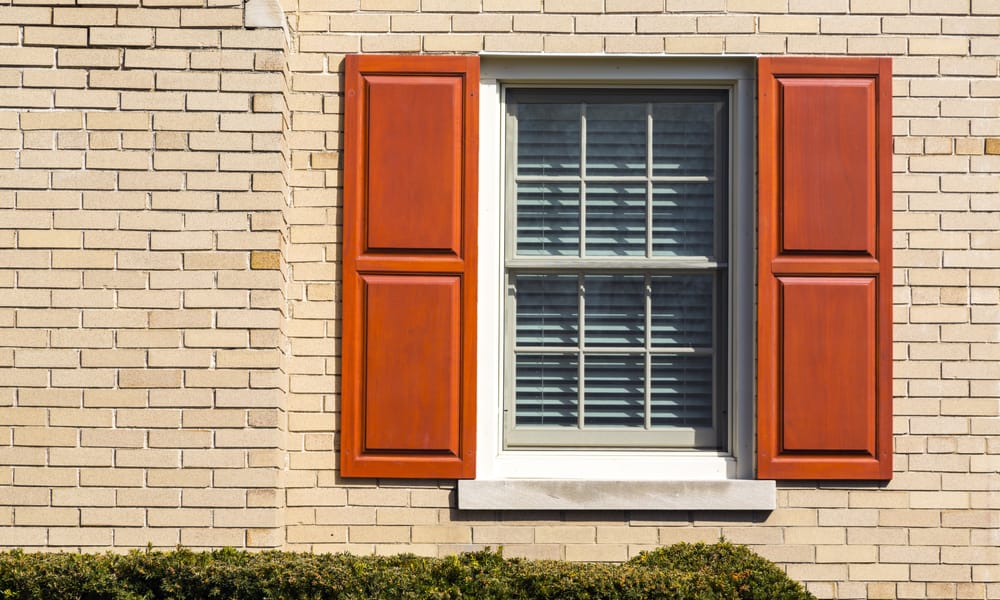 There are plenty of ways you can add decorative elements to your home that will make it stand out and give it a striking appearance, but few are as tasteful – or as relatively inexpensive – as external shutters.

Here, we look at 9 types of external window shutters to give you all the information you might need if you are thinking of having a set installed.

Why would you want shutters?

Before we look at external shutters and the various types that exist, it’s worth taking a moment to think about the advantages of installing any kind of shutters.

There are several reasons why people install shutters, and one of the most important is for extra security. While a window can be broken, if there are also shutters to contend with, a burglar will probably choose an easier target.

Another reason for installing shutters is for protection against the elements. If you live in a storm-prone area, shutters may be an essential addition to your house to keep you safe during storm season.

Again, glass windows can be smashed by flying debris, but shutters can give you an extra level of protection to help keep you and your family safe.

Even in areas that are not at risk from storms, shutters can also help regulate the temperature in your home. In the heat of the summer, closing the shutters can block out the sun, helping to keep it cool inside. They can also let a breeze pass, also helping keep the room even fresher.

In winter, on the other hand, they can help with insulation. While shutters alone won’t keep your house warm, when paired with high-quality double-pane windows, they can help retain heat.

This means that both in summer and winter, shutters can help reduce the amount you have to spend on air conditioning or heating.

Shutters can effectively block dangerous UV rays, too, and they also provide you with extra privacy from prying eyes.

In short, there is a whole range of reasons why you would want shutters on your home. But why specifically external shutters? Let’s think about this now.

Why would you want external shutters?

External shutters can do all the things we’ve just mentioned, but there is one area where they excel, and that’s in aesthetics. There are many types of external shutters, as we are about to see, but all of them can add a striking element to the appearance of any home.

External shutters are immediately noticeable from outside in a way that internal ones are not, and they give a house a homely, classic look that can’t be achieved in many other ways.

Furthermore, colors can be chosen that contrast with the rest of the building, making them stand out even more. A house with tastefully colored shutters can look gorgeous, and many external shutters are made for looks and nothing else.

One other benefit is that, since they are on the outside, they can also protect your windows from damage. This means if you fit functional rather than purely decorative external shutters, they can be useful for keeping the glass of your windows safe during a storm.

There are quite a few different types of external shutters on the market, so now let’s have a look at some of the most popular types – as well as some of the less common ones. 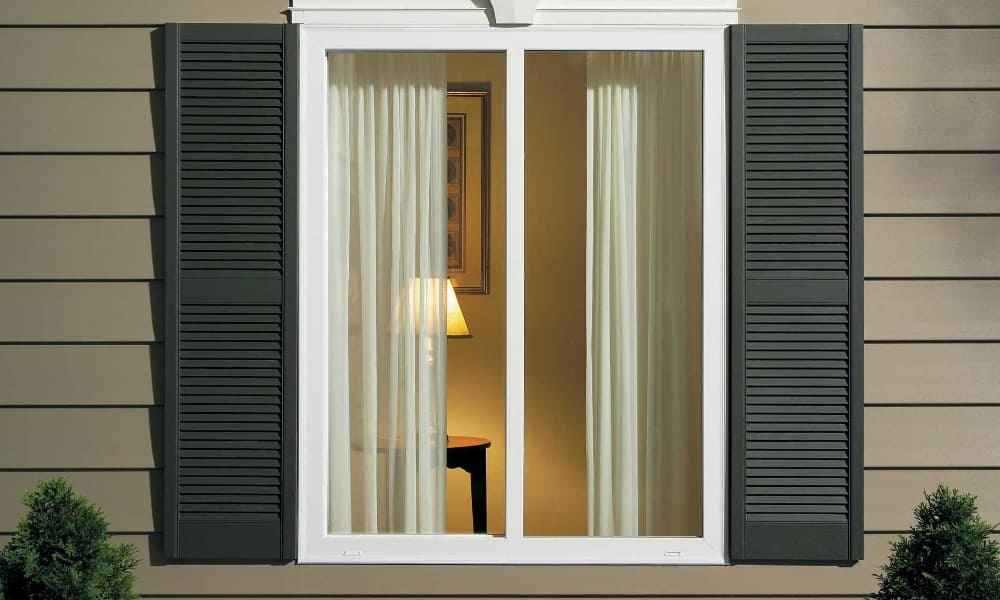 Louvered shutters are among the most popular and consist of overlapping slanted slats that block out the light and prevent people from seeing in while allowing a breeze to pass through.

They are popular with many styles of building, but they work especially well with more classic architectural styles such as colonial or Victorian. 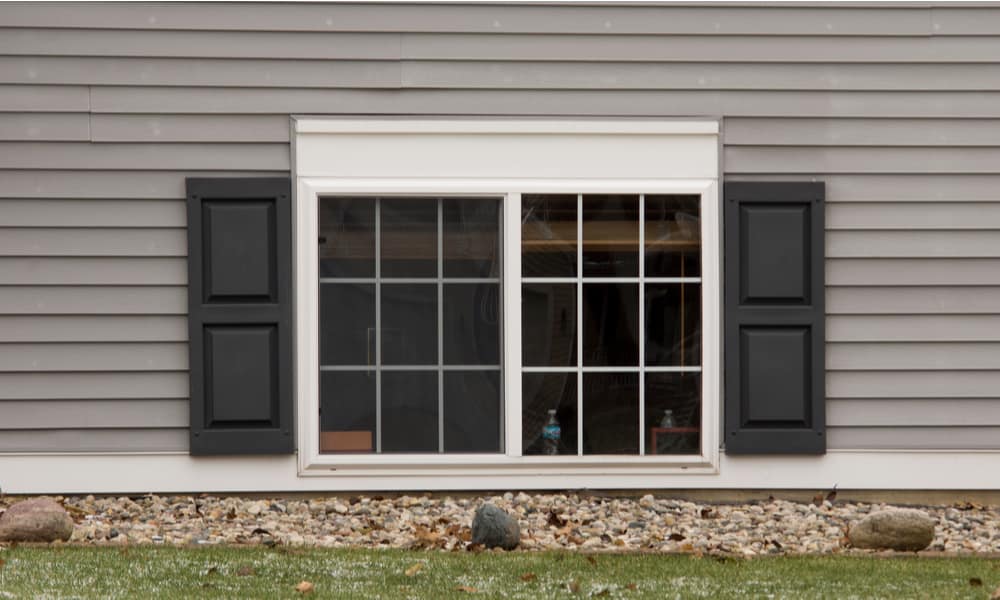 As the name suggests, raised-panel shutters have a raised panel on the front, and this simple design creates a formal effect that works well with country cottage-style houses.

They look great when paired with window boxes filled with flowers to create a rustic, homely feel. 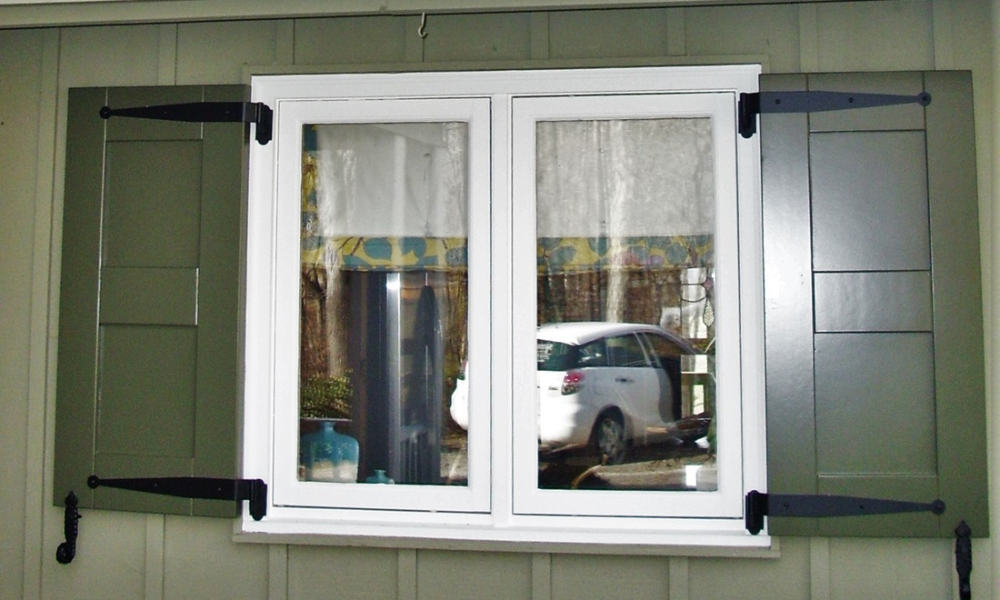 They are so named because they consist of solid flat panels. They don’t have the same ability as louvered shutters to allow a breeze through when they are closed but they a good job of blocking sunlight or protecting from bad weather while also giving good levels of privacy.

4. Board and batten shutters

Board and batten shutters are another of the most popular options. They usually consist of several vertical boards which are fixed together by shorter horizontal boards – or “battens” – hence the name.

The design is simple, but they are extremely strong, making them good in areas where you need protection against strong winds.

The top of the shutter can be square, but they also work well with arched tops, and they create a welcoming rustic look, making them especially suitable for farmhouse-style buildings. 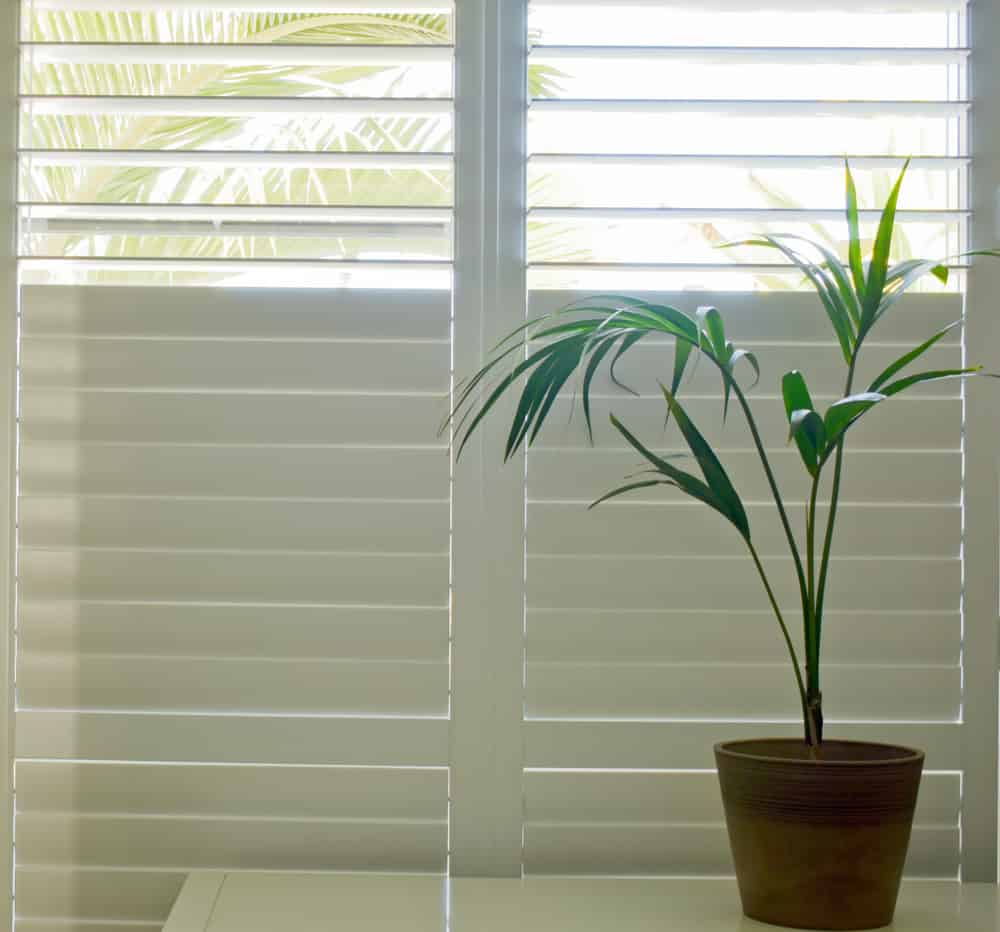 Among the most popular options, especially in the southern states, is plantation shutters. They hark back to former times, as you may guess from the name, and give a house a more laid-back, almost languid feel.

They are functional, too, since they can be closed to protect windows from flying debris – yet in warmer weather, they can easily be opened to allow in a cooling breeze. 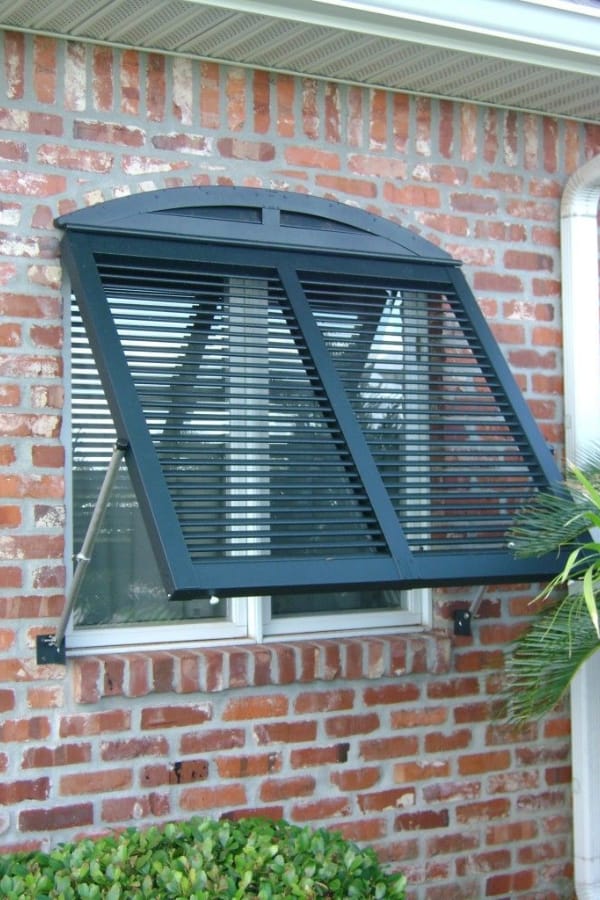 Bahamas and Bermuda shutters are similar in appearance to louvered shutters since they have the same type of slats that block out the sun.

The difference is that instead of being fixed to hinges on the sides, they are attached at the top and are opened by pushing them out at the bottom.

This makes them sturdier than classic louvered shutters, and for this reason, they are more popular in tropical areas that a frequently hit by powerful storms – which, of course, is why they are so named.

They are an excellent choice if you need protection from both powerful sun and strong wind at different times of the year. 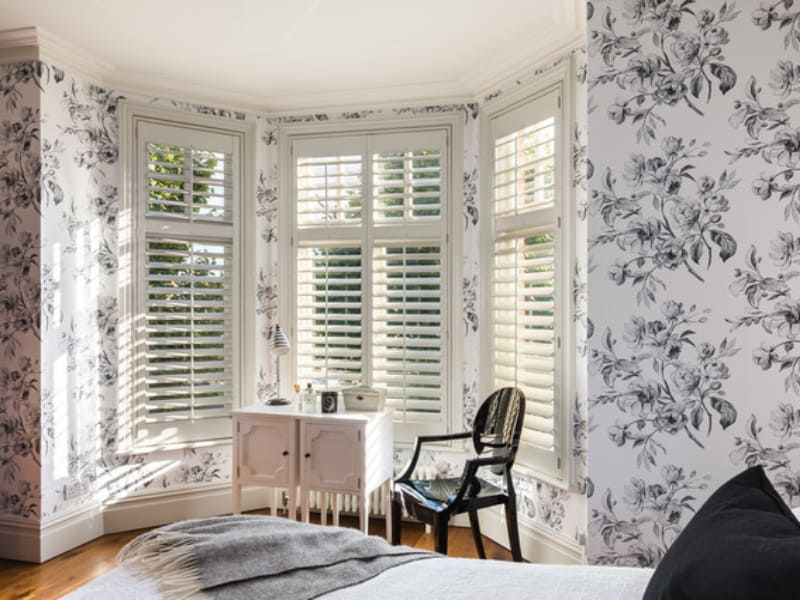 Scandinavian shutters are less common but share elements with board and batten shutters, making them strong and sturdy. However, they also feature cut-out designs and often different colors, making them highly decorative.

They can be used in colder regions to protect you against the weather as well as for cheering you up in the depths of a long winter. 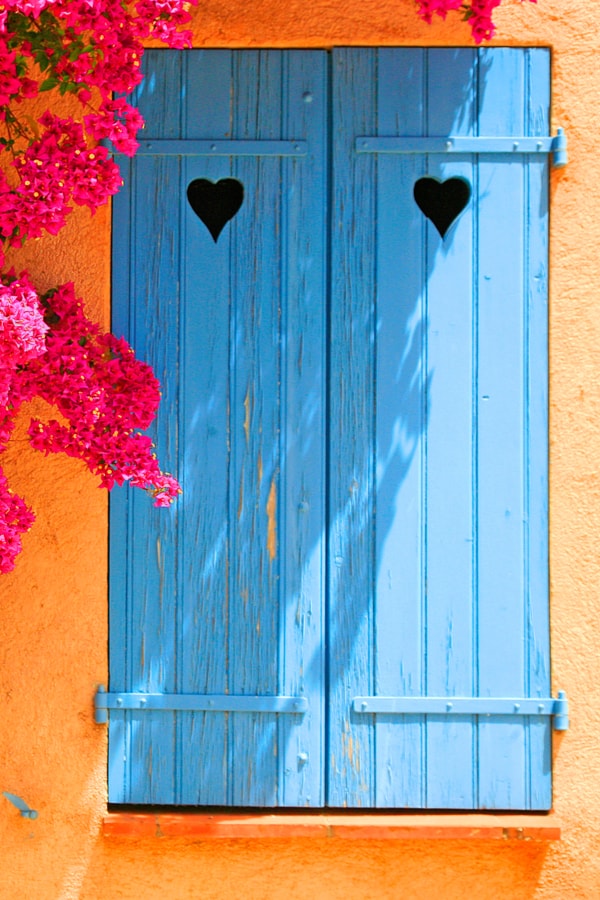 Cut-out shutters became popular in the 1920s and feature cut out shapes and motifs as a decorative element intended to enliven an otherwise plain shutter.

For the more creative homeowner, it is possible to blend combinations of any of these to give your house a truly original look. For example, you could have shutters that are louvered at the top but with a raised panel at the bottom.

When it comes to custom shutters, the only limit is your imagination.

External shutters also come in a range of different materials, each with its own advantages and disadvantages. Let’s look at the main options now.

Wood is the traditional material for making shutters and gives an unrivaled classic look that simply can’t be matched by any other materials.

It is highly versatile and can look great on any style of home. It can also be stained or colored as you choose. If it was sourced from a sustainable forest, it is an ecological option, meaning you don’t have to worry about harming the planet.

The main downside is that it requires a certain amount of maintenance, and if you want it to last a long time, it will need treating at least once a year.

Also known as faux wood, composite wood is made from wood fibers combined with other materials such as PVC. It feels much like wood and looks similar, and it’s a good option for larger windows due to its toughness and durability.

It requires less maintenance than true wood and costs less – but it still won’t be mistaken for the real thing up close.

Vinyl shutters are made from PVC and are lightweight yet strong. They are not susceptible to rotting, fading or cracking and require little or no maintenance.

However, they don’t have the same visual appeal as true wood. You can mitigate this by choosing a wood grain design, but even with this, they will still look plastic, detracting from the authentic rustic style that many people crave.

Aluminum is a good choice if you want something functional that can protect your home – but it is not a great option if you want an old-style, rural look.

Many options – and many possibilities

As we have seen, there is a wide range of external shutters available, but all of them are capable of creating a striking visual effect and giving your home a real touch of character.

Whether you want to recreate a classic look with authentic rustic wooden shutters or you need to protect your home from seasonal storms or hot weather, adding external shutters to your home could prove to be an excellent decision.

1 thought on “9 Types of Exterior Window Shutters: Which Suits You Best?”