Do you need help choosing the right door for your shower? If you answered yes, you have come to the right place. Choosing the shower door can be challenging especially if you have something special in mind.

Furthermore, the shower generally takes up most of the space in a bathroom, so you will probably want to have an aesthetically pleasing shower that is also functional and durable.

When choosing the proper shower, some people pay more attention to accessibility and efficiency, while others want a shower door that will fit their specific style and bathroom’s décor.

Luckily, today there are different shower doors with various styles that will cater to even the pickiest customer. In addition, one can choose doors based on how they close, such as a bi-fold shower or sliding doors.

Let’s check out some of the potential choices for your bathroom! 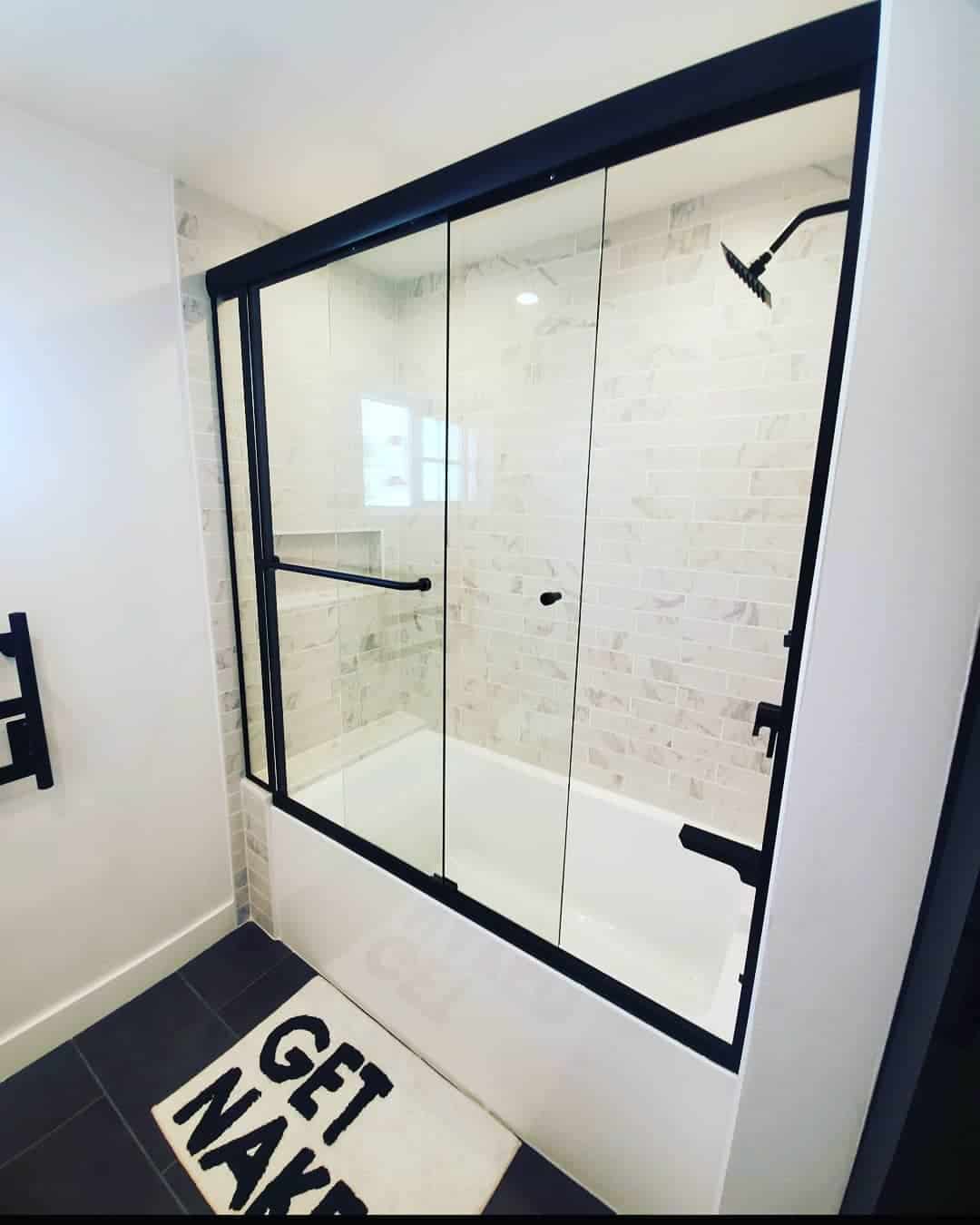 Bypass doors, also called sliding shower doors, are an excellent choice for tubs and wide shower stalls. If you have limited space in your bathroom, the bypass doors will do the trick for you.

They consist of two sliding glass panels, which typically roll on tracks attached to the shower enclosure. However, you can also purchase sliding shower doors without a frame, but they tend to be more expensive.

They operate similarly to patio doors, and mechanical rollers can assist their movement. Most people use bypass doors on stand-alone showers, but they can be mounted on a bathtub with a shower configuration.

Bath screen doors (bi-fold or tri-fold) are another great space-saving option known as inward-opening shower doors. These doors have a hinge connecting the two panels/doors, allowing them to fold inward and slide.

They also have a fixed third glass panel, while the other two can be moved and folded.

Neo Angle shower doors are usually installed in the corner of the bathroom, making them ideal for a bathroom with little space. These shower doors have two smaller side panels perpendicular to two side walls with the door between them.

Most Neo angle shower doors open out into the bathroom, but you can also purchase inward-swinging doors. In addition, they come in two main types, like other doors, which are framed and frameless.

They are usually made of tempered glass and come with a metal frame, giving them a unique, modern, and sleek look.

Pivot doors swing with a handle and a unique hinge mechanism that allows them to open both inward and outward. As a result, they are very versatile and can be used with shower stalls with different shower enclosure shapes, such as straight or curved.

Furthermore, you can attach the pivot hinge to one side of the door or mount it in the center to create revolving doors which can be opened from both sides. This pivot hinge is mostly found on modern and curved glass shower doors.

In addition, they are an excellent choice for curbless showers, providing wheelchair accessibility. 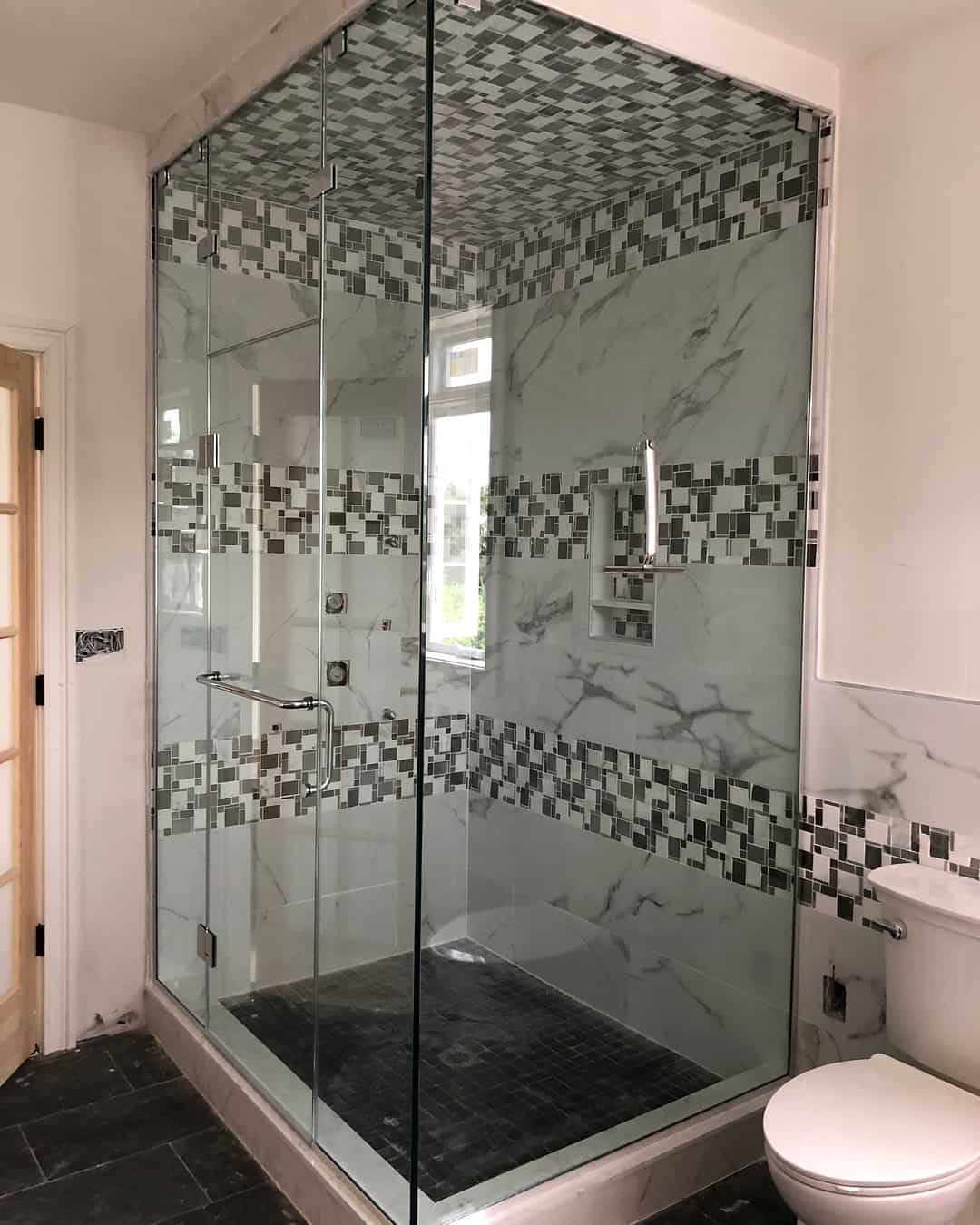 Steam doors are designed for air-tight showers with steam features, meaning they are steam-tight from the floor to the ceiling. They consist of solid glass panels and a hinged door with an air-tight seal. This new technology holds the steam and vapor inside the shower enclosure.

These shower enclosures also have movable panels that you can use as a vent. Due to these features, they can be used both as a shower and steam room.

Today you can find numerous styles, such as transparent or obscure glass, and finishes, such as gold, silver, or brushed nickel.

Hinged doors are the most common type of doors found in houses that have been used for centuries. The hinged shower doors are a single glass panel that you open by swinging in one direction. The hinge can be attached to a stationary glass panel or the wall.

Because of the way these doors open, they are not ideal for smaller bathrooms, which is why they are used in shower stalls with plenty of space. Although most hinged doors open by swinging outward, you can also find inward-swinging types.

In most cases, hinged shower doors have tracks on the bottom, on which they rest when you close them. However, the tracks complicate the cleaning process, as they tend to be perfect spots for accumulating dirt, dust, and debris. 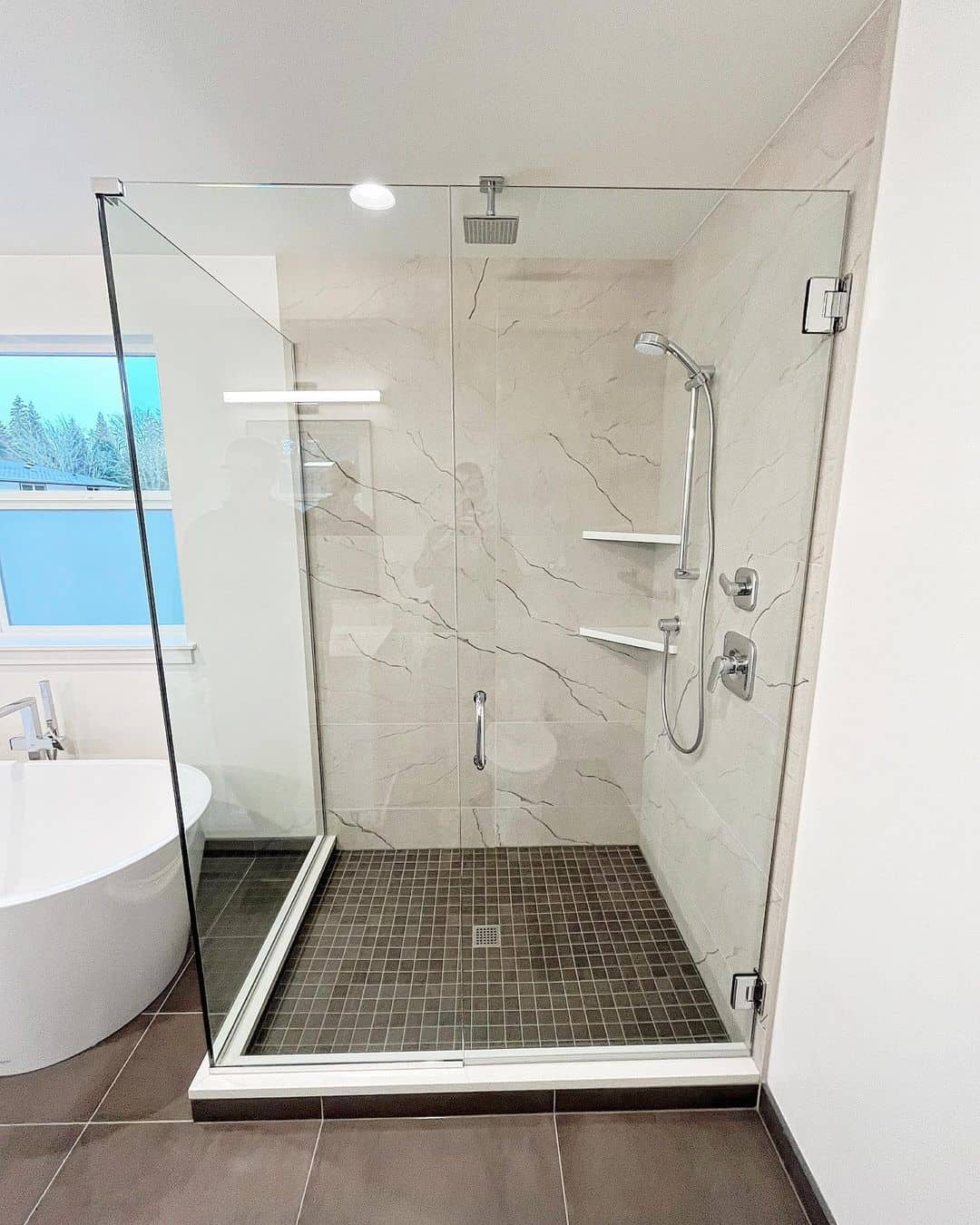 Most shower doors (not all) can be either framed or frameless, which can significantly influence your decision. Both types have advantages and disadvantages, so let’s check them out!

Framed shower doors have a metal frame usually made of aluminum around the interior edges. If you want to upgrade your shower curtain, framed shower door are a highly suitable replacement.

They are generally easy to install because you can hang the frame, and voila! Framed shower doors are cost-effective, very stable, and made of tempered glass, which does not shatter shards but small circles when broken.

In addition, there is a low chance of leakage with these types of doors, and they come in numerous frame designs. On the other hand, they are tough to maintain, and their motion can be limited

Like framed doors, frameless shower doors are available in plenty of design options, but unlike framed doors, they can be swung both inward and outward. Also, considering they have no frames, they are much easier to maintain and clean.

Ultimately, these doors can be a great addition to your bathroom aesthetic because they can emphasize other features and make it seem more spacious.

However, frameless shower doors have drawbacks; they tend to be more expensive. Then, they have less stability compared to the framed shower glass. Although they do not have frames, the glass used for these doors is thicker but still has less strength.

Lastly, installing frameless shower doors can be a nightmare because there have no hinges. Therefore, we do not suggest that you try to make this a DIY project. Instead, hire a professional who will set up hinges.

You can tell you can choose from many types and styles of shower doors. However, the most crucial factors you need to consider when selecting the right shower door are your shower type, bathroom size, and budget.

For example, some showers, such as steam showers, must be used with steam doors; otherwise, the purpose of the shower will be rendered useless. In addition, maintenance is also a significant factor for some people, and if you are one of those, maybe try using frameless doors.

Which door do you think is the best? Can you please share your experience with us? If you have any comments or questions, do not hesitate to ask!