Shower doors are a great alternative to shower curtains as a shower enclosure. They not only look better but are also more practical. Maybe you want to replace your current shower, need to replace the door, or add a brand-new shower with a door!

What Is The Standard Height Of A Shower Door?

The standard height of a shower door is between 72″ and 79″. However, you can find shower doors as tall as 150″! There are a few different factors to consider when choosing the best height for your shower, and in order to get the best fit, you will need to measure your shower or shower space if your shower is being newly installed.

Here are the standard heights of the most common shower door styles and other factors to take into account when choosing a new shower door.

Different shower door styles have different standard heights. In some styles, you may be able to get as tall as 150″, while others don’t go taller than 79″. It is important to choose which style you want or need for your space before anything else, as each style comes with its pros and cons.

Sliding doors are probably the most common style of shower doors. They roll on a track to slide them open and closed, and you can only slide open one side.  These work well for small spaces because you don’t have to take how far the door swings out into account.

A sliding shower door can be more expensive than other style doors and is harder to clean. The average height for this type of door is 76″ unless you have it custom-made, so there isn’t much versatility.

A hinged door is a type of swinging door that is attached to the hinges on your shower enclosure. They only open in one direction and are quite similar to standard passage doors. These types of shower doors are usually seen on small single showers in small bathrooms.

If you choose this type of door, keep the width of the door in mind as it will swing open forward, as you don’t want it to hit the wall or a toilet when it opens. Hinged shower doors have a standard height of 65” to 70”, so they are not a great option for bigger bathrooms with high ceilings.

A pivot shower door, also known as an inline shower door, is similar to a hinged door with a couple of differences. It is attached to pivoting hinges that let it swing 180 degrees in both directions. You can also get double pivot doors if you have a larger shower space.

The other thing that sets pivot doors aside from basic swinging doors is they have a much bigger height range. The standard height for pivot doors ranges from 24″ to 100″.

A fixed shower screen is considered outdated by some people but can be elegant and inexpensive when done right. A fixed shower door is a single glass panel, usually located where your shower head is mounted, to prevent water from coming out of your shower.

This type of door is great for small spaces and is easy to install. The standard door height of fixed shower screens or doors ranges between 10″ to 150″, so it should be easy to find one to fit your space. 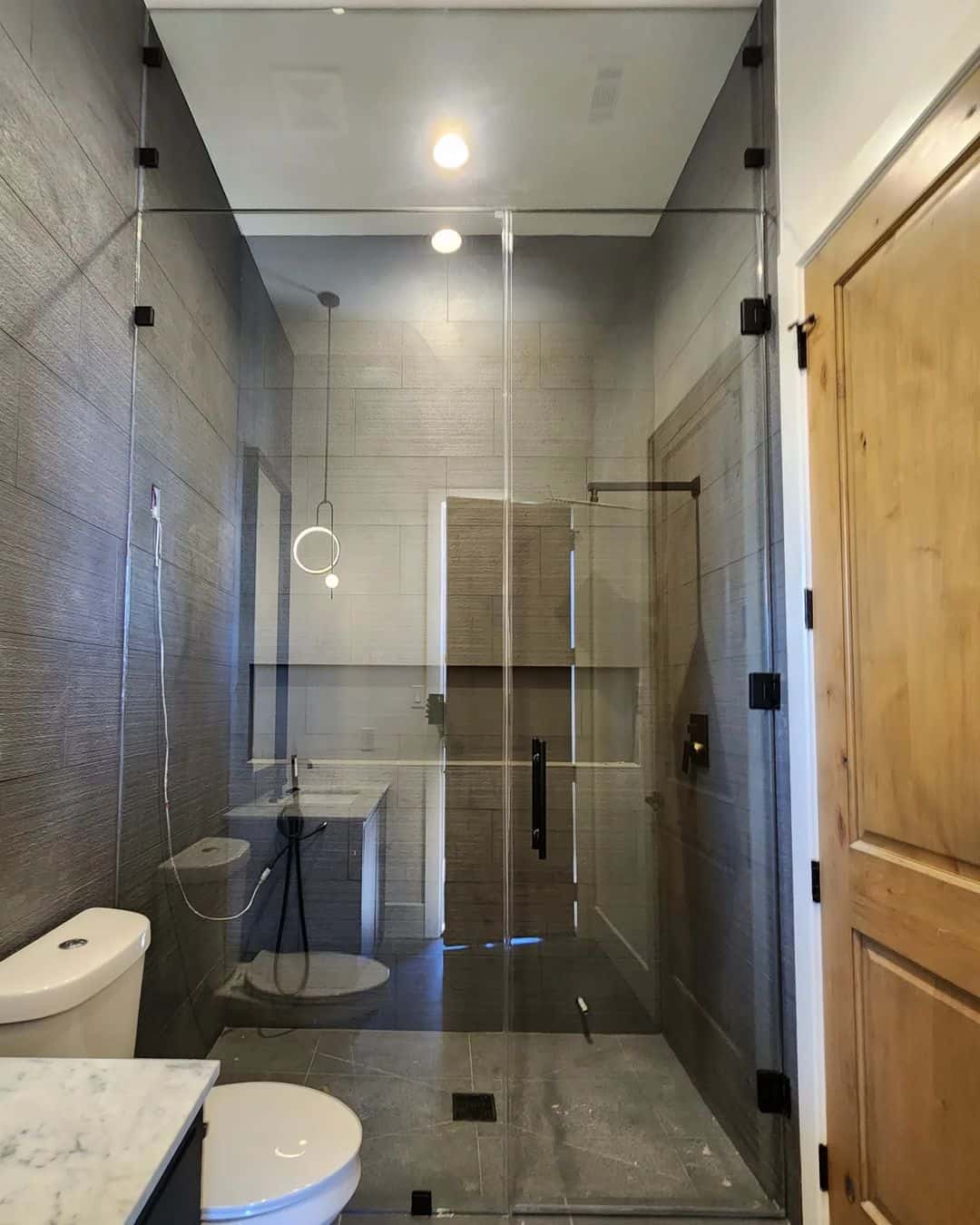 Some of the styles mentioned above come available in a frameless option. Frameless shower enclosures are more aesthetically pleasing than framed ones, but they are a lot more costly.

The type of shower head will make a difference in the height you need for a shower door. Fixed showerhead fixtures are recommended to be 72″ from the floor at a minimum.

4. Space Between The Shower Door And Ceiling

How much space should be between the shower door and the ceiling is entirely up to you, but there are recommendations based on what shower you have.

For instance, if you have a wholly tiled shower with tile up to the ceiling, you can choose whatever height you want. Some people even make their shower doors as tall as the ceiling, like if they have a rain shower head or a steam shower.

How To Measure The Height Of Your Shower Door 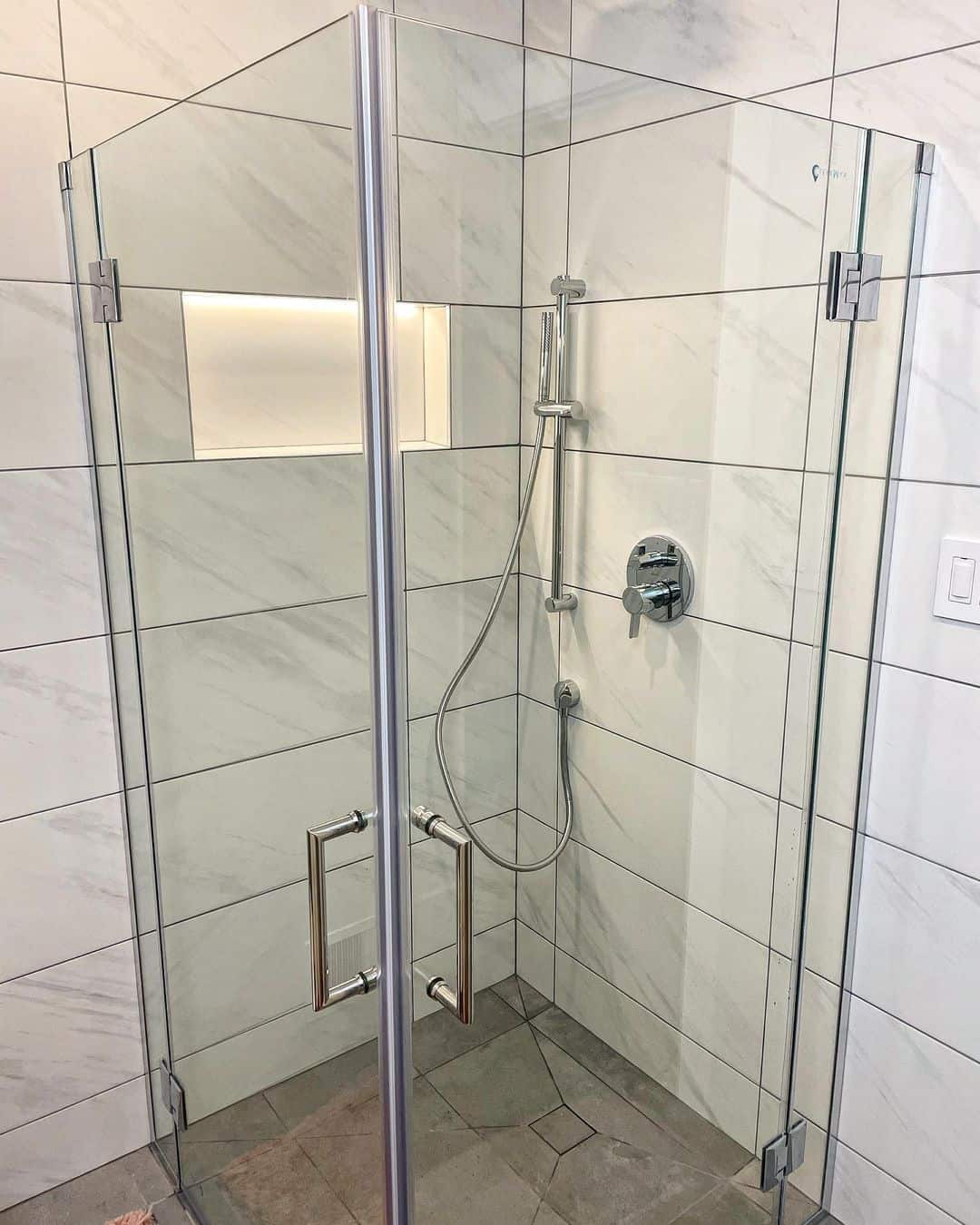 If you want your shower door at ceiling height, measure to the ceiling. It is a good idea to measure on both sides and take the average of both numbers.

Don’t forget to measure your width as well! To measure the width, simply measure from one end of the shower to the other. 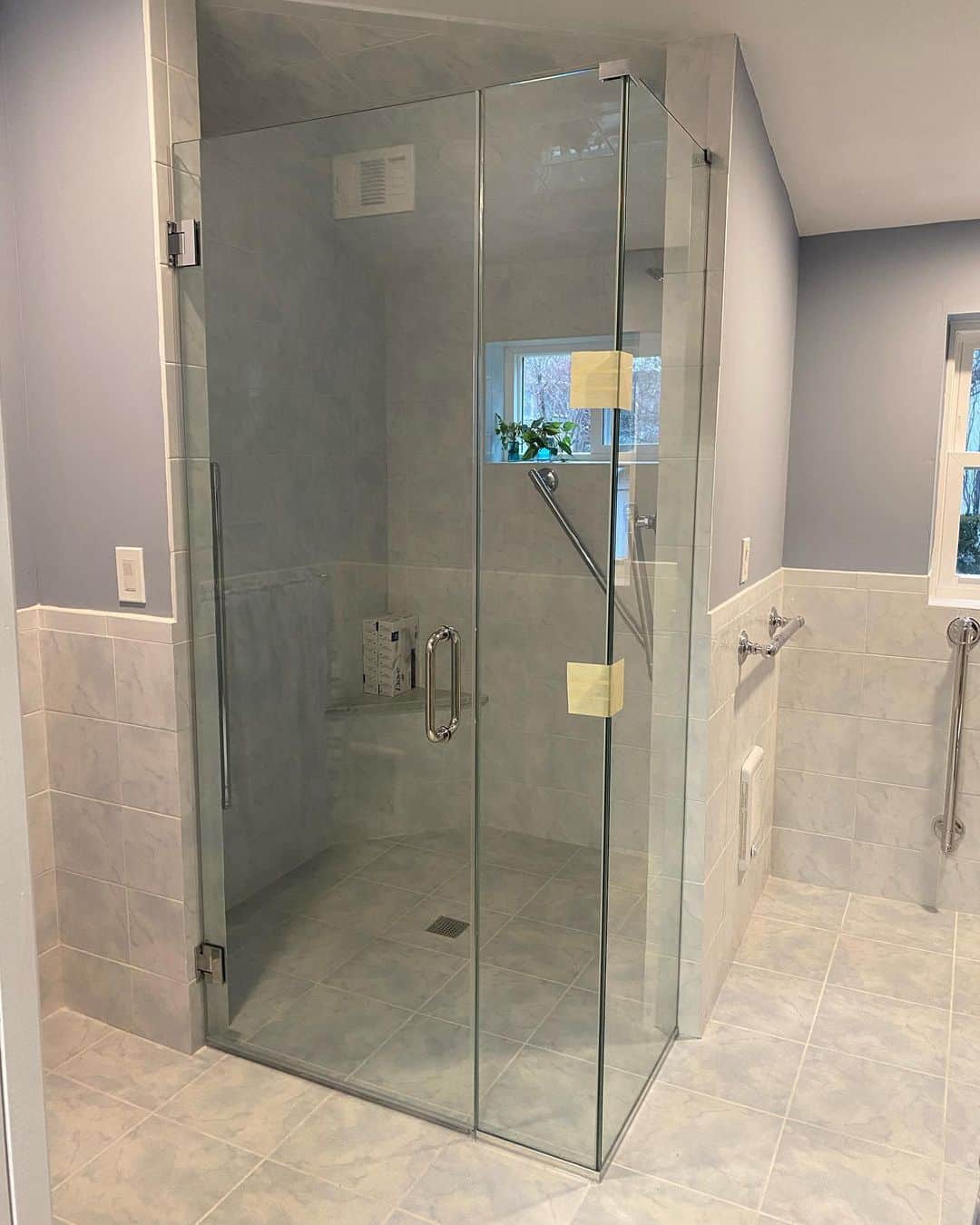 Sometimes, going custom may be the way to go if you are looking to do a complete remodel of your shower. This way, you can choose everything from the width, height, shower style, and shower door style to how tall you want your shower to be.

You can only choose the shower door that fits the dimensions, and you may have an even harder time year down the road finding one that fits. This will be the most determining factor in the height you should choose for your shower door.

If you choose to go custom, make sure to hire a professional contractor if you don’t have any experience. The contractor will even remove your current shower if you have one, so that’s less hassle for you.

If you decide to DIY a custom-made shower, be sure to look up your local building codes to ensure you are in compliance. Different states have different codes that have minimum requirements for rooms and shower sizes.

There are many different styles of shower doors, and they each have a different standard height. Only you know which style and height work best for your space.

We hope you found this article helpful! If you have any questions or concerns, let us know in the comments below! We love to hear from our readers!