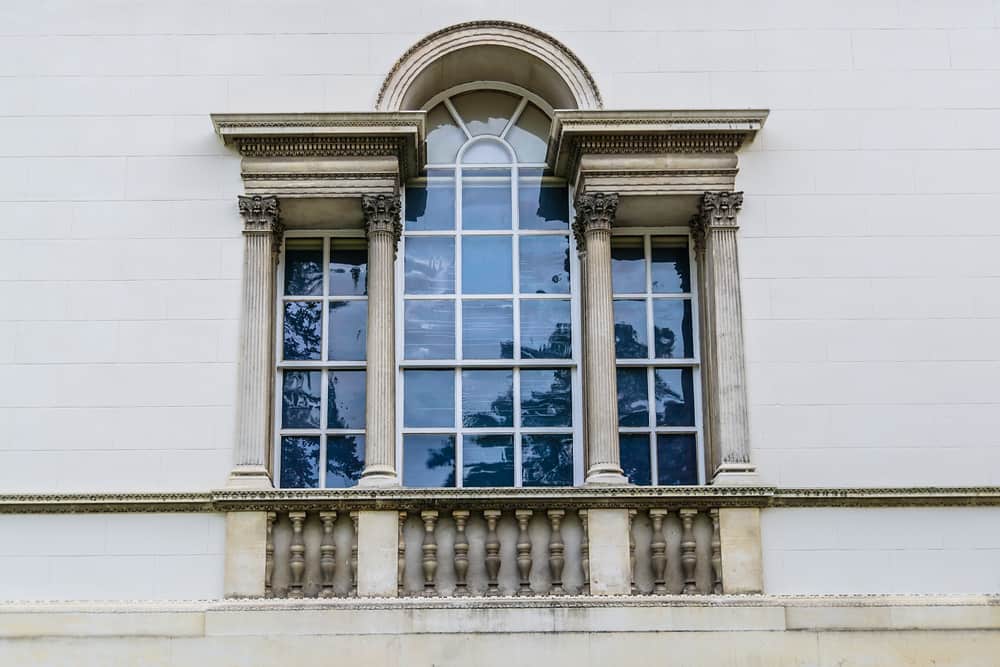 If you have old-style classical tastes and you want to make a big, bold statement with your home, a Palladian window is hard to beat. These large windows exude sophisticated style and charm, as well as giving the interior a lighter, airier feeling.

If you are interested in installing a Palladian window or windows in your home – or if you are just curious to find out more about this distinctive architectural element – here’s our guide to everything you need to know about Palladian windows.

What is a Palladian window?

There is a little confusion over the term “Palladian window”, so what does it really mean?

Palladian windows take their name from the Venetian architect Andrea Palladio (1508-1580) who used them extensively during the earlier part of his career. Perhaps the most famous example is the Basilica Palladiana, one of the first of his buildings to showcase this style.

This type of window was not invented by Palladio, however, and had in fact existed since long before – the key elements were already in use in Roman times.

The most important features of a true Palladian window are a large central window with an arched top, flanked on both sides by smaller rectangular windows or “sidelights” (windows are usually referred to as “lights” in architectural parlance). Each of these sidelights is, in turn, flanked by two columns or pilasters, and at the top of each sidelight is an entablature.

This is the strict definition of a Palladian window. However, in common usage, people aren’t necessarily referring to a window that includes all these specific features.

Most modern homeowners are not interested in whether their window includes the necessary columns or pilasters and entablature to qualify it as a true Palladian window. The majority will only care about the effect the window creates in their home.

This means that often, when someone talks about a “Palladian window”, what they mean is something that has the basic features like the central arched window with smaller sidelights on either side – or even just a grand three-part window – rather than anything more specific.

Sometimes, people even use “Palladian window” to refer to any large arched window, although this is perhaps stretching the term to its limit.

How are they different from Venetian windows? 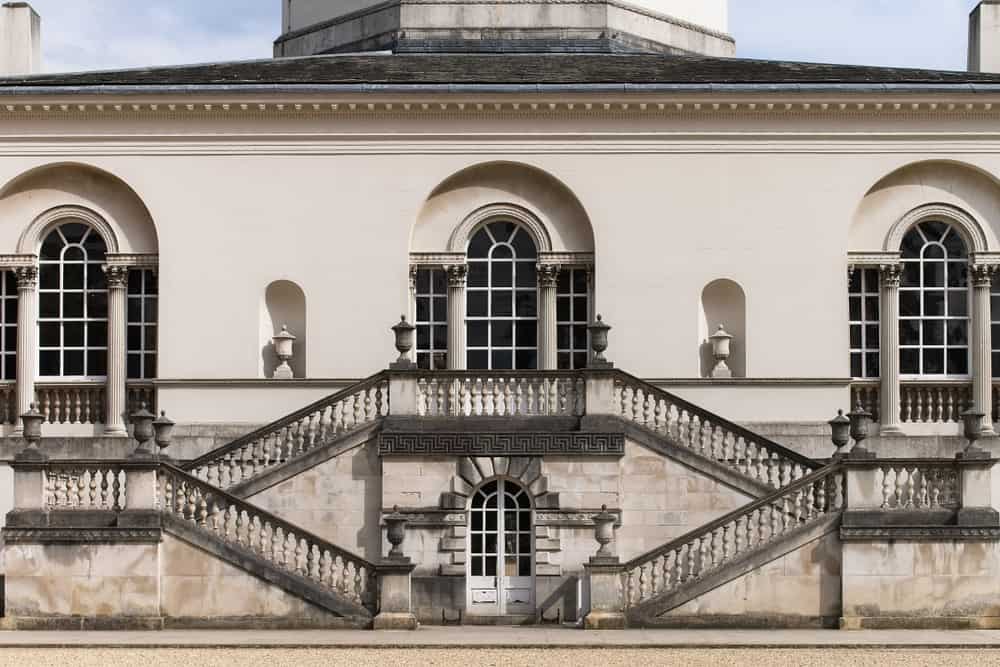 How are they different from picture windows?

Another type of large window that is increasingly popular nowadays is the “picture window” – but although they share some characteristics with Palladian windows, they are quite different.

Both types of window are extremely large, and both types are designed to admit plenty of light. Many picture windows also come in three sections, but that’s probably where the similarities end.

In a way, picture windows are designed not to be seen. They consist of large fixed panes that are intended to showcase the view beyond. Imagine a house on a hill with a view over the mountains in the distance. When you look through the window, you see the mountains – you don’t pay any attention to the window itself.

When were Palladian windows most popular?

Although Palladio was active during the 16th century, architects continued to incorporate his ideas into their work right up until the 18th century.

It is for this reason that colonial architecture in the US was heavily influenced by elements of Palladian architecture, including the Palladian window.

Who would want a Palladian window in their home?

Palladian windows make a very bold statement of style. If you want a home with an elegant classical style, a Palladian window could be the right choice. They convey opulence, sophistication and a certain formality – and as we just mentioned above, this is a style that also harks back to the colonial period.

If that sounds like the kind of effect you hope to create – and such a window would work with the rest of your building and décor – a grand Palladian window is an option to consider.

Also, due to their dimensions, Palladian windows require a building of a certain size to work well, so these windows inevitably give the impression of wealth and even power.

Again, if this is the kind of image you are trying to project – but in a sophisticated rather than crass way – Palladian windows are a good way to achieve this.

When are Palladian windows not suitable? 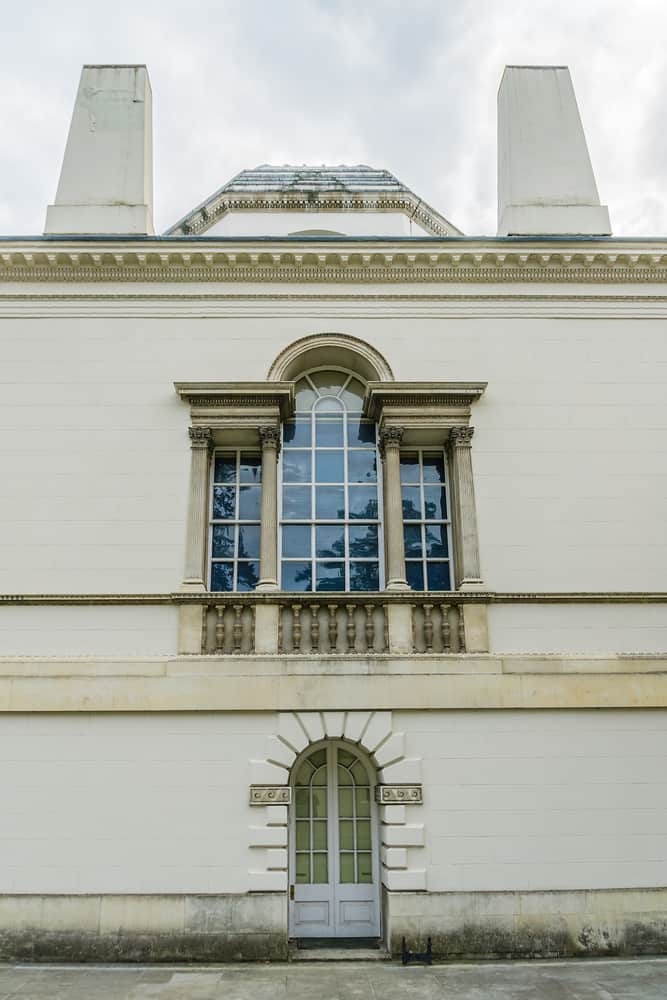 Palladian windows give a building the air of venerable old age and timeless grandeur. However, they are not suitable in every situation – far from it.

For this reason, if you have a modern-style home, Palladian windows are probably not the best option.

Also, due to their immense size, if you don’t have a large home, Palladian windows are a definite no-no – even if you could find a small enough model, a grand Palladian window on a house that is too small would look fairly ridiculous.

How can you install a Palladian window in your home?

If you have decided that a Palladian window will give you the effect you desire, how do you go about installing one?

Since they are so large, if you want to add one to an existing wall, it can entail a large amount of structural work on your home, especially when dealing with load-bearing walls.

If you want to install Palladian windows in your home, the best option is to speak to a professional. They will be able to give you an idea of the amount of work that might be required – as well the kind of costs you should expect to pay.

Where can I see some examples of famous Palladian windows?

If you want to know where the inspiration for Palladian windows came from, you need to go back to the triumphal arches of ancient Rome as well as the Baths of Diocletian.

Although other architects had already begun incorporating this motif into their works before him, Palladio started using the architectural feature with which he became so closely associated in the 16th century. Perhaps the most notable example is in the Basilica Palladiana in Vicenza. The building’s loggia is notable for its inclusion of what we now call Palladian windows – this was one of the first time these windows appeared in this form.

Later, two English architects, Robert Adam and Inigo Jones, began to use the motif in their work building English country estates, and they were in part responsible for the growing popularity the style enjoyed. In particular, Queens House in Greenwich, built by Jones, was the first example of a Palladian house in England – although it doesn’t actually feature Palladian windows.

Former US presidents also appreciated the appeal of Palladian windows. George Washington himself had one built in his home in Mount Vernon, Virginia, and they can be seen at Thomas Jefferson’s plantation house at Monticello, also in Virginia.

Examples of Palladian windows can be found at the University of Virginia, and many other examples can be found in the states of Virginia and Carolina, where the style was especially popular.

While Palladian windows are not suitable in all situations, if you have the right kind of home and appreciate the style this type of window can bring, Palladian windows can add a kind of old-time class and sophistication that few other architectural features can deliver.

As we have seen, this design has been used around the world, and it appears in many venerable old buildings, both in the US and abroad. We hope this post has given you all the answers you were looking for – as well as perhaps some inspiration for your home.