As the population in cities and towns grows, we end up living ever closer to our neighbors. This means we need new ways to protect our privacy when we are at home without having to close our curtains. Privacy window films can protect your privacy but do they still work at night when the lights are on indoors and it is dark outside?

If you are looking for an answer to the above question, you are in the right place. In this article, you will find out everything you need to know about using privacy films to protect your privacy at night time.

A window privacy film is a modern alternative to blinds and net curtains. It can be used on any smooth glass either at home or at the office. Privacy film can be cut to size, which makes it very adaptable and it can be installed in minutes with just soapy water and a squeegee.

Using privacy film is more cost-effective than replacing the glass. It is a very versatile material and comes in different finishes so users can choose the level of privacy they want and how much daylight they want the film to let in.

There are various types of privacy films which are:

While most people will install privacy films to give them more privacy at home, there are other benefits to them, too. While curtains and blinds restrict your view of the outside, many privacy films still let you enjoy the views. They filter the natural light let inside through the windows and block out harmful UV rays.

Using private films will reduce the glare coming in through the windows, which makes it easier to watch TV and use computer screens. They are easy and quick to install, remove, and clean, inexpensive, and come in different designs and tints. 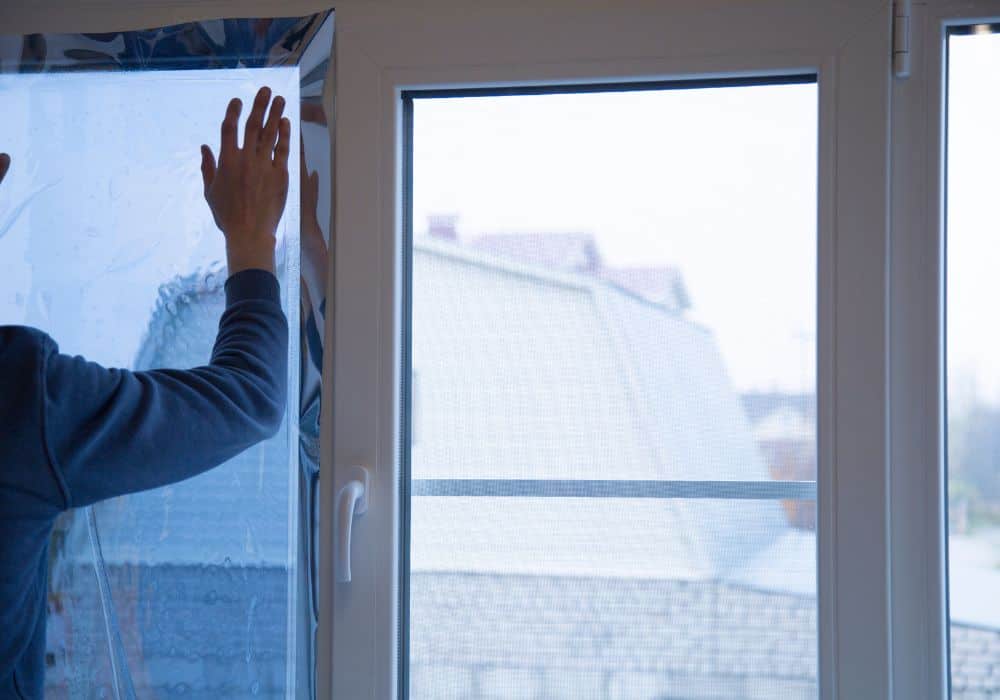 How do Window Films Work?

Privacy films for windows work by reflecting the sunlight and this makes it difficult to see what is inside the house. In this respect, they are similar to mirrors and people outside will see their reflection instead of seeing into your home.

However, during the night, brighter interior lighting can cancel the reflective properties of the film. It is for this reason, that not all private films will be as effective at night time and people will be able to see inside to some extent at least.

So what is the solution? How can you make privacy films work for you 24 hours a day? Keep reading for solutions.

Option One: Curtains or Blinds

While the films eliminate the need for curtains and blinds during the day, you might still like to draw them at night. Having the combination of film and blinds or curtains comes with the benefit of letting in plenty of natural light in the daytime while the soft fabrics create a warm and cozy feeling later in the day with perfect nighttime privacy.

If you are looking to install a privacy film where both night and daytime privacy is important but seeing out isn’t, go for a frosted finish. It works great, for example, in bathrooms, office partitions, and shower doors. The matte finish of the frosted film stops people from looking in and you still get natural light coming through.

Perforated vinyl is more often used in commercial buildings than in private homes because it can be used to advertise products and services and create eye-catching facades.

However, the material offers one-way privacy and viewing with solar shading and can work perfectly at homes, too because they let you see through while blocking the view from the outside. 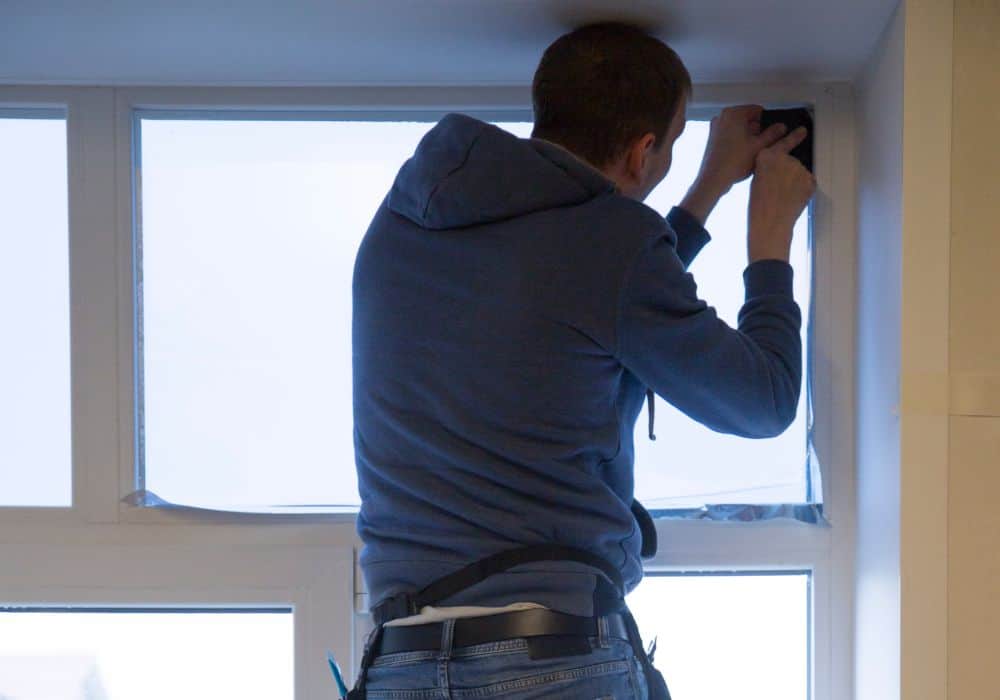 Blackout films block the light from the outside and the inside. They are common in places such as spas and restaurants but are rarely used at home. Why? Because while they stop anyone from seeing into your home, you cannot see outside either. However, they can still work in homes, for example, in storage rooms.

Using a decorative film on your window will increase your privacy, but also enables you to add a decorative design to your home. Decorative window tinting is a popular choice on window screens where it is not necessary to see out. Designs for decorative films include lines, gradients, dots, and geometric designs.

You can increase the effectiveness of your window privacy film by controlling the intensity of your interior lighting with focused task lights and dimmers. When you don’t fill your entire home with light when it is dark outside, the film will keep working more effectively especially if you combine dimmer lights with a heavier tint.

This option will only work if you have control of the exterior lights outside your home. Reducing the light outside your home will help the film work better during the dark hours and increase your night-time privacy. However, this will not work if the outdoor lights are streetlights or other lights not in your control. 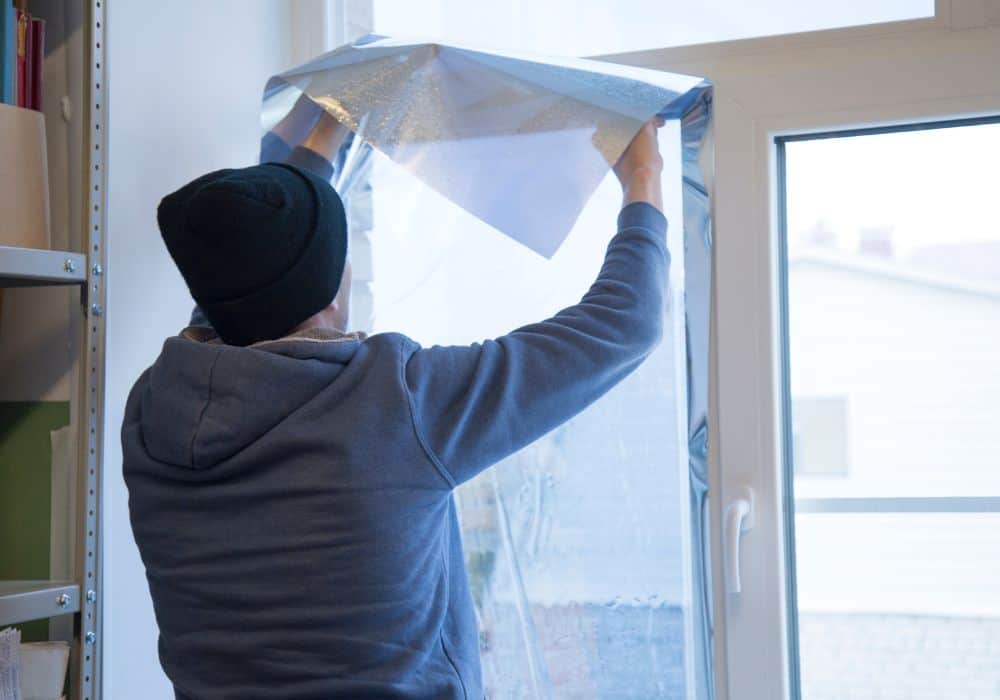 If you are not looking to just increase the privacy of your home but to keep expensive equipment out of view, your best choice is to choose opaque window film. The best option will be either frosted or a blackout window film.

The frosted film will still let in natural light, while the blackout option will not. This makes the blackout privacy window film a great option if you need to create a dark room, for example, to watch films.

Because the static cling films are non-adhesive, they can be installed in a matter of minutes and removed in just seconds. If you are renting and want to put up a privacy film, they are the best window films for you since they will leave no glue deposit when they are removed.

Temporary privacy films can also be used, for example, while you are on holiday on your doors and windows, to hide the fact that you are away. When you are back, you can simply remove them within a few moments.

If you are looking to protect the privacy of your screens rather than block people from looking into your home, then cloaking screens are a good option. They are used on LED screens and work by blocking the light from the screen so that anyone passing by will only see a black screen.

The first thing you need to do is clean the window. You don’t want any dirt or debris left between the window and the film. Next, you need to measure and cut the film to the required size.

Then peel the privacy film and spray a mixture of soap and water onto the glass. Starting from the top of the window, line the film straight and set the film on the window. Use a squeegee to push out air bubbles. Finish by trimming off any excess film. For a more detailed, visual guide on installing a window film, you can watch this short video.

If you are looking for a privacy film that works as well at nighttime as it does during the day, then your only option is an opaque film, such as blackout or frosted film. However, you will lose your daytime views when you install one of these options.

If you wish to keep the beautiful views from your windows, then consider other options such as combining the window film with curtains or blinds or using dimmers to lower the amount of light inside of the room.

We hope this article has answered your questions about whether private films work at night. If you have anything else you would like to ask about them, write your questions in the comments section.