Thunderstorms and lightning strikes following them terrify most people and animals. There is a saying that when thunder roars, you should go indoors. Unfortunately, going inside sometimes is not enough to protect yourself from lightning.

A flash can still hit your house, cause significant damage to your property, and even harm you. Let’s discuss can lightning strikes through a window and how to prevent it if possible.

According to the National Severe Storm Laboratory, there are roughly 2,000 storms worldwide at any given moment. Over 100,000 thunderstorms hit the US every year, and more than 25 million lightning bolts hit the country annually.

The National Weather Service mentions lightning strikes as one of the top three storm-related death causes. Still, many don’t understand how and when lightning occurs and how to protect themselves during the storm.

If you know that a thunderbolt can strike from a distance of 15 miles (24 km), you will understand that most lightning casualties occur due to a slow reaction or a lack of it. Remember that danger appears from the moment you hear the first thunder.

Once a thunderstorm forms, there is a difference in electric charges between clouds or a cloud and ground. The air acts like an insulator for the charge differences. However, an electrostatic discharge or lightning will occur when the electric charge exceeds the air insulation capability. There are three types of lightning strikes:

Total lightning is the rarest type since it means there are both cloud-to-cloud and cloud-to-ground strikes simultaneously.

Thunder is the lightning strike’s sound effect that comes after a while because the sound is slower than light. You can sometimes hear a rumble of thunder within a radius of 10 miles (16 km) of a spot struck by lightning. 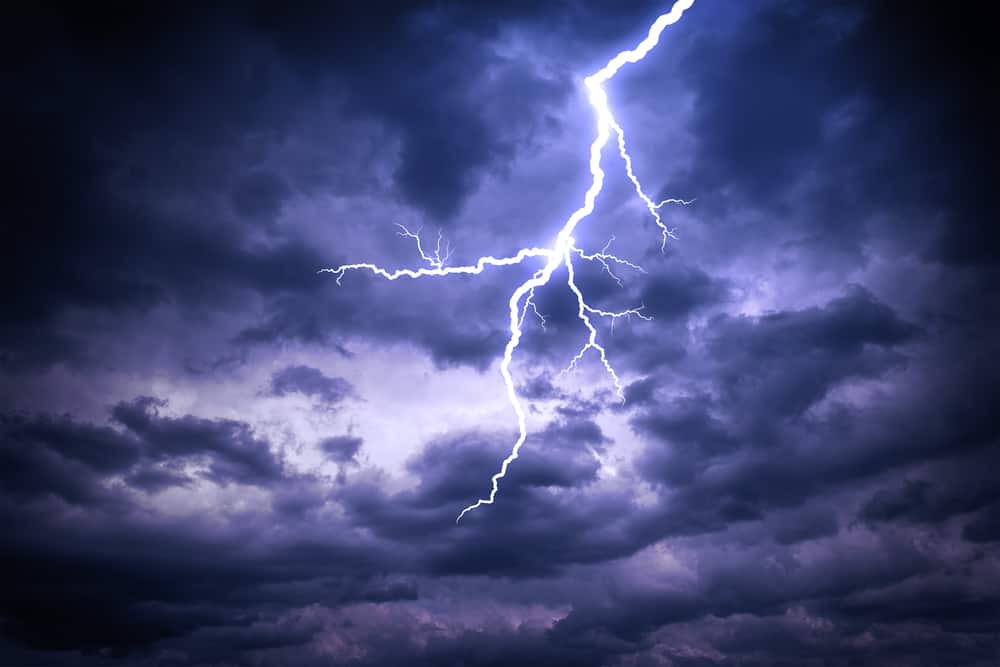 If a lightning bolt strikes your house, it will travel through the most conductive route. There are the paths it can take:

The glass is not a significant electricity conductor, so there are minimal chances of a flash striking directly through it. However, metal components in the window frame can be a problem. Once lightning hits your window, the glass will shatter all around and possibly injure someone standing nearby.

There is one more problem. Window glass can still explode from impact or heat if a flash hits next to your house. Sometimes, lightning can strike people sitting by the window, but most survive.

One of the well-known cases was the case of Giana Scaramuzzo, who was struck by lightning through a mirror. National Weather Service states that 10% of people struck by lightning die. Still, that is an average of 57 people in the US only every year.

Possible Damage to Your Property 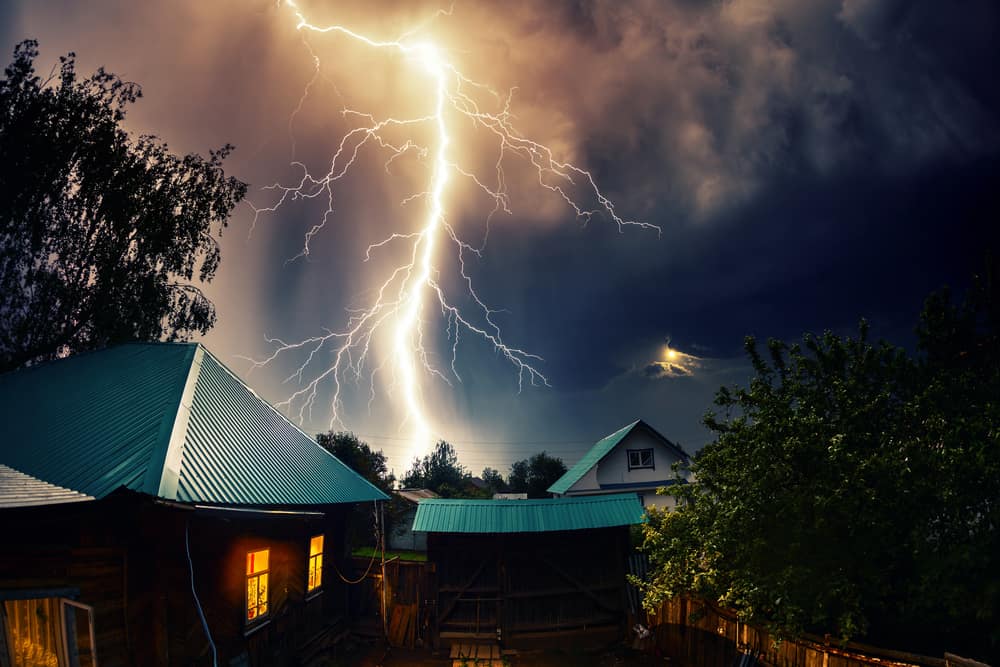 Once a thunderbolt emerges from a cloud, it will go through the route with the least possible resistance. Therefore, any electricity conductor in your home can attract it and serve as a path ending deep down in the ground, where the electric discharge dissolves.

The riskiest elements in your house are:

That means lightning has several opportunities to strike any home and cause severe damage. The US national average lightning-related insurance claim for 2020 was $28,885, but it was significantly higher in California, with a rate of $217,555.

The most significant damage was related to a lightning bolt destroying windows, installations, and walls. Most insurance companies categorize thunderstorms and lightning damage into one or several categories:

As I mentioned before, lightning will jump from one conductor to another. Therefore, be prepared that any flammable material on its way will ignite due to the thunderbolt’s high temperature.

That includes house structures such as roof and attic, nearby surroundings such as trees and bushes, and old window frames.

In addition, thunderbolts can pass by wires, which will burn and affect the complete circuits. In that case, a fire can easily ignite and quickly spread throughout the house.

Unfortunately, fire is not easily manageable and controllable once it starts. It can reach your curtains, furniture, and mattress. In case of a fire hazard, you shouldn’t hesitate to call 911. The US Fire Department gets a fire alert every 86 seconds on average.

Lightning causes explosive shock waves on impact. From cracks in walls and chimneys to crates in the soil or concrete, it destroys everything with a loud sound effect.

Witnesses of lightning strikes often describe the strike as a bomb explosion. The results are fractures in bricks, tiles, stone, and even cinderblocks. It can lead to walls collapsing, glass shattering, and house foundations crumbling.

It rarely happens that lightning strikes a house without damaging a part or the entire electrical network in its way.

Wires are great conductors meaning the shock can fry all the appliances plugged into the sockets, even if you turned them off before the impact. As I have already mentioned, a thunderbolt can ignite a fire while damaging or destroying your TV, laptop, or stove. 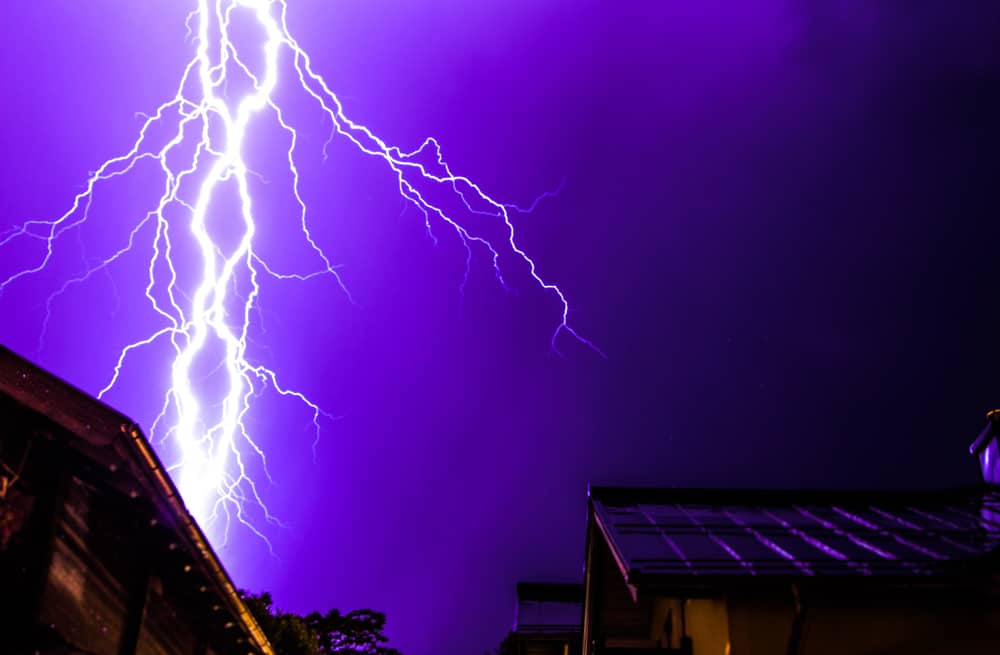 Although being indoors is not a guarantee of avoiding thunderbolts during a thunderstorm, it is undoubtedly a better option than being outside. There is a list of several precautions to minimize the chances of a lightning strike:

Once the authorities warn the nation about a coming thunderstorm, it is wise to prepare some supplies. For instance, you will need a first aid kit if lightning hits your home. Typically, a first aid kit includes:

Always include regular therapy and other necessary supplies in the bag. For instance, choosing foods that require little or no preparation, like canned goods, fruits and vegetables, protein bars, and peanut butter, is crucial.

The best possible way to ensure the safety of your family and property during thunderstorms is to install a professional lightning protection system.

Some people rather pay a premium insurance policy, but living in an area with frequent thunderstorms makes the protection system more beneficial and cost-effective.

The primal purpose of such a protection system is not to attract or prevent flashes of lightning. Instead, it creates a safe path for electrical discharge and offers fire protection and structural damage protection. It typically features:

An air terminal – A vertical protrusion with a needle top designed to receive an electrical discharge.

Conductor cables – They lead from an air terminal to the ground, creating a safe path for lightning. They usually go along the roof and sidewalls by the connection point with a ground rod.

The ground road – It is a long and heavy lightning road that ends deep down in the ground. 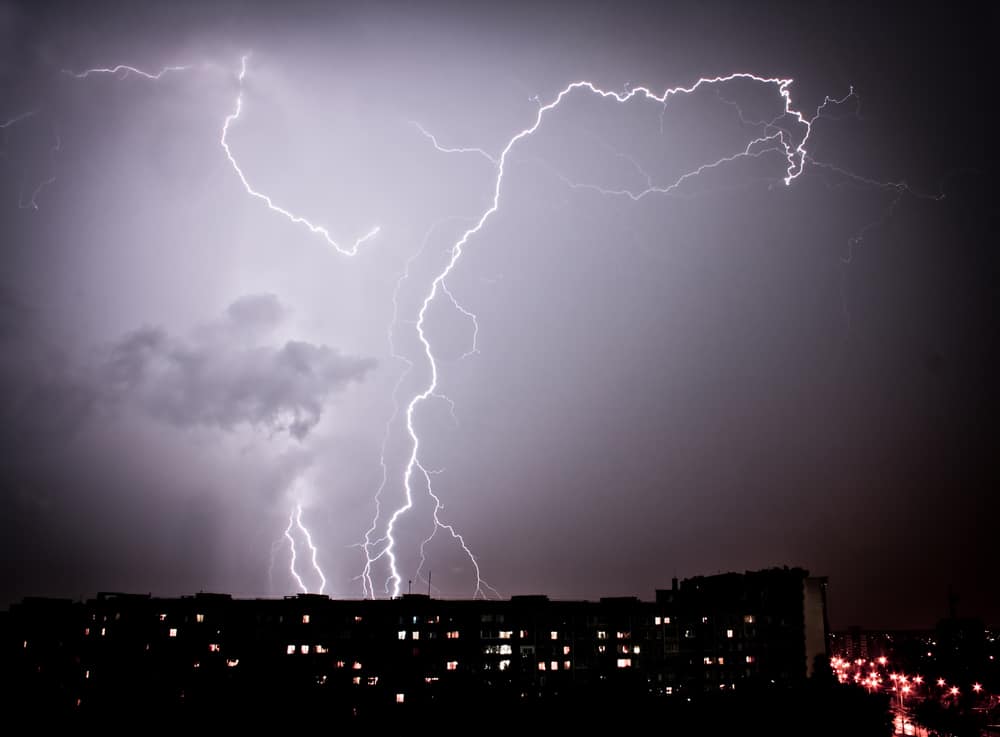 Unfortunately, dozens of people die due to lightning strikes every year. The lack of emergency help and quick intervention often increases that number. The main reason is the myth that a person is electrocuted and shouldn’t be moved or touched.

The first thing to do in such an event is to call 911 because the injured person needs CPR. Then, check if there is a pulse and regular breathing.

The good news is most people survive lightning strikes, although various temporary or permanent consequences often remain, such as:

Lightning is an electrical discharge between clouds or cloud-to-ground. It can strike through a window on your house, but there are also several other paths it can take, like the wires, plumbing, and concrete. Fortunately, a lightning protection system can prevent fire, power surge, and shock wave damage.